In coming up with the concept for this blog, I had to work through a few things.

First and foremost was the habit I have of sticking with the same brewers and same styles of beer. Like most craft beer lovers, I tend to stick with my favorites. But that would make for an exceptionally boring blog. So I created a few rules.

The rules in place, I set about trying to find a new beer to review. This is not so simple when you have to follow rules, and when you stumble on a new liquor store with an absolutely awesome selection of craft brews (This in itself is a post for another night). As I wandered the aisles of this craft beer super store, my beer senses were overwhelmed. IPA? No, did it last week. Barely Wine? Stout? Wheat beer? Rice beer, I've never even heard of that....

Style was one thing, then another issue reared its ugly head. Domestic or import? US or Belgian? I decided on domestic. Then another question- should I support local brewers, maybe focus on them? As I wander the aisles, more than one customer asked me "do you work here?". "No, sorry, I'm just a big fan" was my response as I wander by with that confused, glazed over look on my face. I cannot count how many brews I picked up, only to place back on the shelf. And then, like a religious revelation, I saw the box (yes, I said box).. 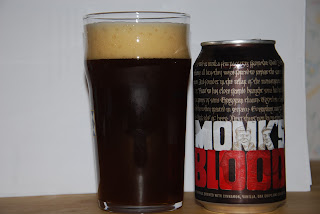 The thing that caught my eye was the small square box and the words "MONKS BLOOD". Kinda have to stop and read after that. This is described as a 'Belgian Style Dark Ale brewed with cinnamon, vanilla, oak chips, and dried figs".  I took this super intriguing box of cans home and began my work.

This beer pours a dark red/mahogany color, and it look almost cloudy, something I would suspect would have to do with the oak chips it aged on. Nose was surprisingly tame, a little fruit and malt was all I really got.
Mouthfeel was lighter than expected for Belgian style dark, with more carbonation than expected. Now to taste...

Recall how I said that I don't have a very refined palate? Well, here's where that creates an issue. As I taste, I'm trying to pick out all the subtle flavors, of all the ingredients that this beer is brewed with. I get the vanilla and oak right away, and I love it. However, my experience tells me that oak aging mellows beer and muddles the flavors. So as I drink the first 8.3% ABV 12 ounces I'm sitting there trying to taste the cinnamon and dried figs. No, no, not getting it. No luck, lets have another. So I crack open can #2 of this lovely 8.3% abv brew and continue my taste study. Vanilla? Check. Oak? Check? 8.3% alcohol? Check. Gee, that vanilla is really strong, I can feel my tongue numbing. Getting some wheat and bread notes now, but still no fig or cinnamon. Hmm, better crack open # 3....wow, this one is pouring really cloudy compared the first two......

Suffice it say, this being only my second session of drinking after taking 46 days off for lent, perhaps I should have picked a "smaller" brew, something closer to the more traditional 5% ABV. I never did taste the cinnamon and figs, but this is a one very, very good beer. And it comes in a can.

I give this beer 3.5 on a scale of 5. Definitely worth a taste. And thanks to the guys at 21st Amendment Brewery for proving that good beer can actually come in a can.