"Pretty Things" do come from Somerville....

When I think of Somerville, MA, I don't think "pretty". Let's face it, it isn't the most picturesque of places.

But it is home to the Pretty Things Beer and Ale project.

The brewer behind the project is Dann Paquette. I didn't know the name, but the web site says Dann has been around the local beer scene for some time, having put in time at John Harvard's, Ipswich, Pilgrim, Haverhill Brewing, and most interestingly (to me), he was also at The Northeast Brewing Company. (This was a great little brew pub in Allston in the 90's that went down way too soon. I spent many a night there by the fireplace enjoying their great brews, and I always regretted that I never got around to getting my mug club Membership.)


Suffice it to say, this guy knows good beer.

I had been given a gift of a Pretty Things Barley wine for Christmas, well before this blog was even a concept, and I thought it was great. As I perused the shelves of a local craft beer shop Friday night, I stumbled across a few bottles of Pretty Things on the bottom shelf. Friday was cold and drizzly, and the EIP- East India Porter- seemed an appropriate fit for an unseasonably cold and wet June night.

This beer is a historical recreation, part of a series of beer recreations that Pretty Things does. The naming convention, in this case, uses the date that the recipe was first brewed in London...


December 6th, 1855 East India Porter
A part of the "Once Upon a Time..." series from
Pretty Things Beer and Ale Project
Somerville, MA
6% ABV 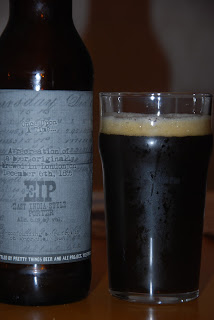 East India Porter, explains the bottle, was actually the majority of beer that was brewed in London and sent east. It was not IPA, as commonly believed. The IPA was sent in small batches and drank by the officers in the British Military, while the porter was drank by the soldiers.


This beer appears to pours black, but when held up to intense light it reveals itself to be a deep, dark caramel color. It gives a thick, creamy, brown tinted head.


The smell is malt, malt and more malt. Which shouldn't suprise, as the recipe calls for pale malt, brown malt, black malt, and amber malt. There is slight hop hint as well, and a surprising alcohol presence for a 6% abv brew.

Taste is... deep and earthy, the roasted malt really stands out. The alcohol seems to warm the palate and intensifies the malty goodness. There is a surprising hops bitter finish that fights through the deep malt backbone of this beer. Its really different, and its fantastic.  Hoped with Kent Goldings & Spalt, it really compliments the malt beautifully.

I loved everything about this beer. It taste great, and it imparts a piece of beer history that I found fascinating. The guys at Pretty Things clearly take beer seriously- this porter shows it. I give this beer a 4 out 5 rating.

definitely sounds worth a taste...nice review...although I'll hold out any applause until I get a chance to try.....