I am on vacation this week, so you can only imagine my overwhleming joy when I saw a Facebook status update from Julio's Liquors late last week announcing this:

Dogfish 120 Minute now in stock. Limit 1 per customer, no holds.

Accordingly, I skipped my normal gym at lunch routine and sped off to Julio's and grabbed my bottle of hop gold.

What's the fuss you say?

Let me back up. Dogfish Head 120 Minute IPA is an occasional release from Dogfish Head Brewery in Delaware. It's a super high end IPA, between 15-20% ABV, and has a flavor profile so outrageous and delicious that hop heads like me snatch it up the second it hits the market, never mind the $10 for a 12ounce bottle price. Compounding the issue is the fact that last years batch of 120 Minute IPA was dumped by the brewery due to an issue with the quality. It wasn't up to par taste wise, and rather than release it, they dumped it. If you followed the show Brewmaster's on Discovery Channel, you may have seen the episode. Suffice it to say, dumping 9,000 gallons of your signature beer, on national tv, has a way of creating a nice demand for it once you finally bring it back back to market.

The 120 Minutes refers to the amount of time the beer is hoped in the boiling process. The longer the hopping, the stronger the profile. (Dogfish also brews 60 and 90 minute IPA's as well.)  The average IPA takes about 10 days to brew. This one takes 3 months. It's a labor intensive brew, so you can see why it is only an occasional brew, despite its excellence.

But finally, it is back.

I actually waited two days before opening this bottle. The bottle says "this is the holy grail for hop heads". It is correct.

The color is honey, clear, no bubbles, and it seems to have an oily sheen on the head, with only hints of off white lacing remaining. A very thin head returns with a swirl of the glass, but quickly retreats. 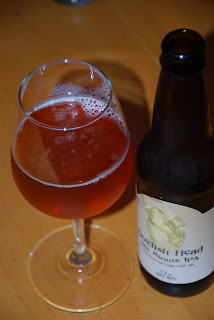 Smell is awesome. Huge hops, all hops, it wafts from the snifter and engulfs the nose. Sweet and piney with an alcoholy backside, this aroma comes to you.

Mouthfeel is active and intense. Thick on the palate, oily and alcohol fuzzy on the tongue.

Taste is intense, deep hops, piney, grapefruity hints, with a subtle sweetness and warm finish. Oddly unbitter given the sheer amount of hops.

For the amount of hops, an oddly smooth finish. The hops are super tasty, they don't ruin the palate like with a Stone Ruination IPA. You can really taste the distinctiveness of the hop flowers.

This is the ultimate IPA. Beer like this is why I started this blog. 5+ rating, on a scale of 1-5, from me.