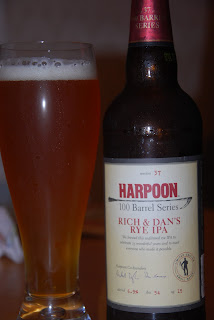 I've spent many a happy hour drinking at the Harpoon Brewery.

I love the beers. I love the brewery staff. I run in the annual Harpoon 5 Miler every year. I attend every 100 Barrel release tasting that I can possibly attend (always with my buddy Daupha. Always).

One of my first dates with the woman who would eventually become my wife began when she came to visit me one afternoon while I was working at Harpoon Summerstock back in 2001. (she asked if she could buy me dinner after I got off work. How could I say no? Fast forward 10 years, and now we take our daughter to the 5 Miler and watch her dance to the music at the after race party.)

It's truly a special place for me.

So naturally, when I saw that they had brewed a special beer in celebration of their 25th Anniversary, it was a "must buy". And, as it was an IPA, it fits perfectly with my August Theme- "drink all the IPA I can". 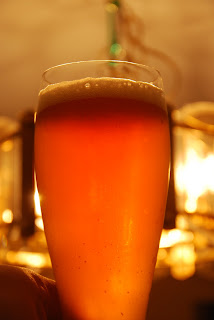 Rich and Dan's Rye IPA
Harpoon Brewery(ok, it's technically the Massachusetts Bay Brewing Company, but who knows them by that name?)
Boston, MA
6.9% ABV

Smell is obvious- HOPS. The famous, signature Harpoon hop aroma that greats you every time you open a classic Harpoon IPA is also present here. Its exactly what I want when I buy a Harpoon IPA. Its very floral, but unlike the classic Harpoon IPA, this has hints of a warm spice in the nose.

Mouthfeel is creamy, medium bodied, with a lot of fizz on the tongue. I'm thinking its probably rye spice settling into my palette.

Taste is bitter citrus hoppy, and spicy, with a sturdy malt back. Finish tastes more rye spice than malt or bitter.

I loved this beer. It presents with that awesome Harpoon IPA hoppy aroma, but the rye keeps it in check and neutralizes some of the hop kick one might expect in the taste department.  Its a great, great take on Harpoons best beer. I give it 3.5+ out of 5.