We finally have some snow on the ground, and when the weather gets cold, I think stouts. STRONG stouts. Ones that can keep you warm on a cold winters night.

Russian Imperial Stouts, to be exact.

This one is local to MA. I'd be lying if I said I knew much about Clown Shoes beer. Their beer appears to be brewed by Mercury Brewing in Ipswich, but its not an Ipswich Beer.

The bottle describes the beer, and the name, thusly-

Imbued with a monstrous amount of dark malt and aggressive hops, Blaecorn Unidragon is a powerful and complex brew designed to improve with age" 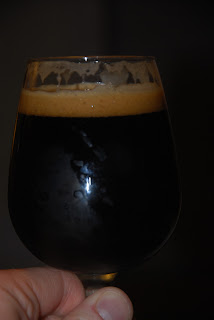 This beer pours black and oily, with a quarter inch of dark tan head that is vibrant and sustained. Great head retention on this brew.

Smell is intense- equal parts alcohol, hops, and dark roasted malt, it's a blend of smokey earthiness and alcohol.

Mouth feel is thick and creamy, velvety smooth, with just a touch of carbonation.

Taste is surprisingly hop forward- bitter hops greets the tongue, followed by an wash of alcohol, then the intense roasted malts on the follow through. I get a touch of licorice and smokiness, maybe bitter chocolate, but its subtle. Finish is slightly bitter and smokey.

I found this to be an ultra aggressive take on the style. The prominence of the hops give it a more East India Porter taste (much like Pretty Things EIP) , but with the mouth feel and lesser carbonation of a stout. The alcohol almost overpowers the smokey goodness of the dark roasted malts.

I enjoyed it, however, and would cautiously recommend this brew to Russian Imperial Stout lovers who have a designated driver or are enjoying it at home.