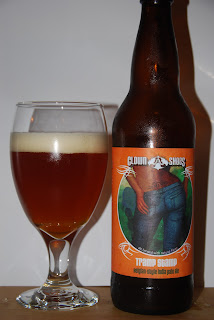 We last visited with the talented brewers at Clown Shoes back in the winter, when I reviewed their excellent Russian Imperial Stout, Blaecorn Unidragon.

For IPA month, I decided to see how these fine brewers approached the IPA.

First, I gotta say I love the bottle art. Clown Shoes took some heat last year for the depictions of woman on the labels. 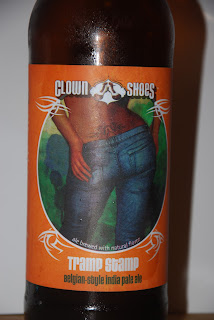 I'm not going to rehash that here. I think their bottle art is great, and tastefully done. After all, its a beer bottle, not a NY Times Op-ed piece. Lets all relax.

As for the beer in that bottle here is what the Clown Shoes web site says about it:

"Like a stamp on a tramp, this beer is about not so subtle seduction.  Soft but complex malts, Chambly yeast, sweet orange peel, Columbus, Amarillo, and Centennial hops have merged to create a bodacious Belgian IPA."

Pouring a nice cloudy, deep, dark orange with two fingers of foam, this beer looks beautiful in the glass. The off white head refuses to collapse. Ever. Tremendous head retention.

The nose presents mildly yeasty, and there's not much else. A few swirls of the glass to try to free some more scent from that thick head doesn't release any. 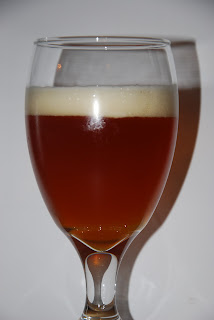 Mouthfeel is thick and full. Heavy for an IPA, a stagnant and ominous presence on the pallette.

Taste presents with citrus notes and grapefruit like bitterness up front, but only mildly. As it moves down the tongue, there there is a slight spike in bitterness before a dry, almost sour, yeasty finish.

Not a bad beer to be sure, but also not overly exciting. I expected bolder flavors here. I didn't register the spices used at all, and that was disappointing. Belgian styles usually have a nice marriage of spices and citrusy brightness, and that distinctive Belgian yeast brings a nice finish. For me, that was all lacking in this brew.

Accordingly,  I don't recommend this brew, not because its bad, but because I feel there are better IPA's available.

Diasgree with my opinion? Let me hear about it! Leave a comment.