Its August again, and I've decided to once again dedicate this month to my favorite beer style- the IPA!

This year we are kicking off IPA month in style, as I finally got my hands on a few bottles of Maine Beer Company's legendary "Lunch" IPA.

This beer is constantly mentioned among the ranks of the best IPAs in the country, often compared to Russian Rivers' "Pliny the Elder" and The Alchemists "Heady Topper".

At 7% ABV, this beer blurs the line between IPA and Double/Imperial IPA. I'm tempted to classify it more closely to more a regular IPA due to its incredible drinkability, unusual with an IPA as the hop bitterness tends to preclude sessionability. However, this is not a standard beer by any measure.. 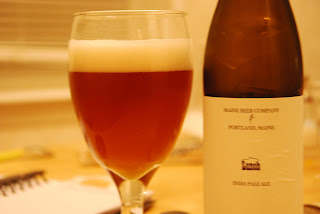 This beer pours a hazy red orange, with a thick, luscious slightly off white head that remains throughout the drink, leaving lots of beautiful lacing on the sides of the glass. 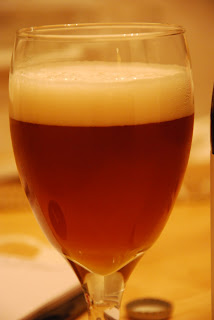 Smell is Amazing- at first, sweet, with hints of tropical fruit. A second sniff reveals the treasure trove of citrusy hops underneath. Notes of orange and grapefruit begin to permeate the nose.

Mouthfeel is similarly amazing- soft and luxurious. Velvety smooth on the tongue, embracing the palette as it washes over.

Taste is hoppy greatest, but not over stated like you might expect. Grapefruit bitterness envelopes and plays on the tongue, but just to tease before it transitions into more a juicy, red grapefruit like sweetness and wipes out the introductory hop bitterness. Finish is dry and a touch spicy.

This is quite possibly the most perfectly balanced IPA that I've ever had.

A superb IPA. Superior smell, mouthfeel and drinkability make this a "must buy" brew.  Taste is excellent, although I'd personally like a bit more hop bitter kick. A more drinkable IPA I've not had in my life.

Highly recommended. A must buy if you can find it. Distribution is limited to NE currently, as I understand it.