I'm taking a break from IPA Month today to take a moment to talk about the great craft beer scene happening down on "the Cape" (that's Cape Cod, MA, for you non locals). 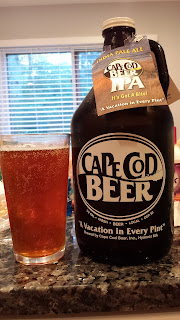 Last week I was on the Cape vacationing with my family. The Cape, for those of you not familiar with the area, is that funny looking arm that looks like its flexing off the east coast of Massachusetts. It's physically separated from the mainland thanks to the Cape Cod Canal,  Access to "The Cape" is limited to two lone bridges that cross the canal. Wanna go to the Cape? You gotta cross a big 'ole bridge that was built in 1935. Anyone who has ever experienced a summer vacation on "The Cape" is familiar with the famous Cape traffic backup thanks to bridges built in 1935 that didn't have a clue about 2015 traffic volume.

Cape Cod is part of Massachusetts, but it really is a different world. Cross the bridges, tune the radio to Pixy 103 (where its always 1985....and that's not a bad thing!), and you are in a world of beaches, fresh seafood, Cape Cod league baseball, mini golf, and more t-shirt shops than you could ever dream of! Cape Cod is a different, special, wonderful place to go, and I highly recommend it as a vacation destination to anyone. 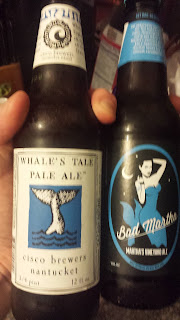 But one thing seemed to be missing, at least for me. Good, locally brewed beer. I've been vacationing on the Cape my entire life. The beaches and fresh seafood can't be beat. But eating fresh haddock from Seafood Sams with a mass produced non-local macro brew just didn't work for me. But until very recently, it seemed that there was no local, Cape Cod beer scene.

But that's all changed.

I counted 10 different beers consumed from these 4 breweries alone, and I loved 9 of them.

From Bad Martha brewing on Marthas Vineyard, I enjoyed the Martha's Vineyard Ale, their flagship beer, an ESB. 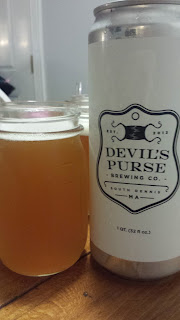 From the other Cape Island, Nantucket, I loved the Whales Tale Pale Ale from Cisco Brewers, an English Style Pale Ale.

From Cape Cod Brewing, I had two great beers, the IPA, and the Beach Blonde Ale, and American Style blonde ale. Both of these are available on tap at the aforementioned Seafood Sams, so you can enjoy great locally caught seafood and great locally brewed beer.

And finally, from the newest Cape brewery, Devils Purse Brewing Company, I had no less that six new brews, five of which I loved, and the sixth, well, that was a DIPA with brett, and I am not a fan of brett.

Shown here is their tasty Pollock RIP IPA, checking in at 7"ABV and "hopped" up on Chinook, Apollo, Colombus, Ultra and Warrior hops. I loved this beer.

The point I'm trying to make here is that Cape Cod, aka "the Cape" has a GREAT craft beer scene. If you find yourself "on the Cape", be sure to eat and drink local. The beer is fresher, made locally, supports the local economy in far more meaningful way than drinking some non-local brewed tasteless macro beer.