Here are the 5 words I believe best describe the year 2015 in craft beer (your 5 words may differ):

The red hot craft beer industry continues to grow at amazing rates in every conceivable statistic/metric.

According to a recent IBISWorld report, the segment experienced
18.8 percent annual growth from 2010 to 2015; however, the company predicts that the segment will experience a much lower annual growth rate of 5.5 percent from 2015 to 2020, reaching $6.5 billion by the end of 2020

In line with this, in July, the Brewers Association released mid-year data indicating that craft beer production volume increased 16 percent in the first half of the year.

According to the association, from January through the end of June, approximately 12.2 million barrels of beer were sold by craft brewers, up from 10.6 million barrels in the first half of 2014.

Locally, craft brewers Trillium, Jacks Abby, and Wormtown all moved to new, significantly larger locations to allow them to meet the huge -and still growing- demand for their beers.

In the case of Trillium, they opened a second, larger (16,000 square ft!) facility in Canton while keeping the original Fort Point location. The new Canton location will serve as Trillium's primary production facility, with a theoretical capacity for 35,000 BBL's annually. (BBL stands for "barrels." A barrel of beer is 31 gallons and the standard size for a keg is a half barrel.)

Within Trillium’s first full year of production in 2014, they brewed 1,000 barrels of beer, and this year they’re on pace for about 1,500 barrels.

Framingham's Jack Abby moved down the road from their original Morton Street location to a larger facility on Clinton Street. The new 67,000 sq. foot space (up from the Morton Street locations 12,000 sq. ft) features state-of-the-art brewing equipment including a canning line and a 60 bbl brew house for initial brewing capacity of 50,000 bbls annually, with opportunity to scale up to 125,000 bbls.

The expansion to 100 Clinton St. required a $6 million investment in equipment and site improvements, Jack’s Abby told the BBJ earlier this year. And, now they have a restaurant on site as well.

Wormtown Brewery started out in 2010 in an old ice cream shop adjacent to Peppercorns on Park Ave in Worcester.

In January of this year, they moved into a brand new facility on Shrewsbury Street. The new facility currently has a 6,000 barrel brewing capacity that is easily expandable up to 15,000 barrels. In addition the new brewery incorporates a modern packaging line which has allowed Wormtown to expand their distribution to include package stores.

and that's just off the top of my head.

As the craft beer market soars, it steals market share- and dollars- from the older, bigger, mass brewed conglomerates.

And this does not go over well with the Board Members who run these conglomerates, believe me.

But rather than dedicate their considerable brewing resources to crafting better beer, they've started to simply buy up the smaller craft brewers they compete with. It's a somewhat disturbing trend, albeit a legal- and often very smart- business practice.

Breckenridge Brewery (CO), Four Peaks (AZ), and the UK Camden Town Brewery were all acquired by the global giant in a span of only 5 days this month alone. They purchased Elysian and Golden Road Brewing earlier this year.

THAT, my craft beer drinking friends, is buying power.

But it not just Bud buying up all the breweries.

Heineken, the world's third-largest brewery, bought a 50 percent stake in Lagunitas in September.

Ballast Point was purchased by massive conglomerate Constellation Brands for an unprecedented $1 billion in November.

So why is this happening? Many reasons. Sometimes it's simply money. Sometimes the craft brewery needs the resources of the acquiring company to grow. As I understand it Bud has left Goose Island pretty much alone, the beer hasn't suffered, and judging from the lines I saw on Black Friday, Bourbon County Stout is still as popular as ever. So being acquired, it's not always a bad thing.

But ask yourself this- who really brews your beer? 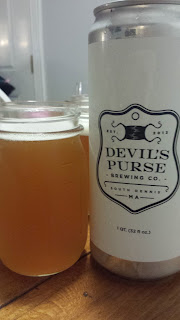 Have you noticed a LOT more cans on the shelves of your favorite bottle shop these days? I sure have.

According to Nielsen data, 88 percent of case volume in the craft beer segment is comprised of bottles, clearly dominating the segment. However, cans are quickly growing and saw a 39 percent increase in case volume in the past year.

The brewers will tell you that the packaging offers a more event friendly and sustainable option for their consumers. They are not wrong. A beverage industry November report notes : "One of the worst things beer can be exposed to is light. Many brewers look to cans to, No. 1, remove light, and No. 2, because consumers can take cans a lot of places they can’t take bottles".
And with cans comes one of my favorite new beer things- the "Crowler"- a massive, 32 ounce can of craft beer. (see photo, left). There's something cool about holding a giant, cold can of brew in your hand. 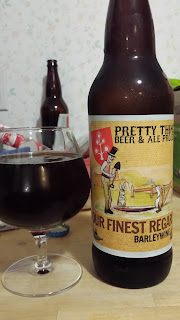 4. PrettyThingsBeerandAleProject (ok, this is really 6 words in itself, cut me some slack, its my blog!)

These are the first two sentences on the Pretty Things web site:

And they were not a brewery. They were gypsy brewers, didn't own a brewery, and only sold their awesome, awesome beers in 22 ounce bombers.

From the first time I discovered them in 2007, I have loved their beers. Absolutely loved them. Their portfolio, from top to bottom, was the best in the business. Everything they brewed was a winner, in a big, big way. Not a loser in the bunch.

Sadly, true to their word above, Pretty Things decided to end the project this year. It saddens me greatly, as I sit here drinking a "Our Finest Regards" Barelywine.

Dan and Martha, thank you for the awesome, outstanding brews. I will miss them greatly. I wish you the very best, and I hope you keep brewing!

This one is personal, as Crafted is the new craft beer (and wine) store to open in my town.

Finally I have a place locally where I can buy great beer! Technically they opened in 2014, but 2015 is their first full year of operation, so congrats Kenny! My new favorite beer store!

Have you noticed more craft focused beer shops opening in your area?  They are popping up everywhere, and this is a good thing. And this has a domino affect of forcing the existing liquor stores to up their beer selection in order to compete, and I've definitely noticed this occurring in my town.

What 5 words would you use to describe the year in beer for 2015?