I have been jonesing for an IPA. All week, and all weekend, I have been craving hops.

Today, I finally had the cash and time to hit the liquor store. In a frantic attempt to save both time and money, I scanned the prices and labels, paying more attention to the price (apparently) than to the style or name on the bottle.

(I also, intentionally, picked up a black IPA, as I thought I had my traditional IPA covered. More on that beer later this week)

My selection this week is nonetheless a worthy beer to quench your summer thirst. And it is locally brewed. 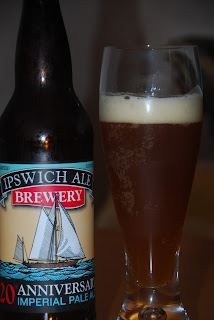 
I popped this bottle open and poured it into a tall pilsner glass.

Smell was strong- malt, alcohol, and hops. All three aromas were strong, but not quite pungent, and all were in balance and nicely followed each other out of the glass in perfect order.

I took a sip. This beer is full bodied, thick and alcoholy on the tongue, with low carbonation. 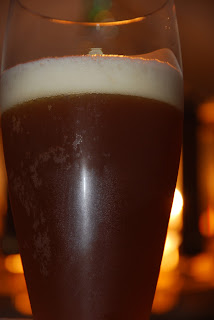 Taste is very strong malty sweet up front, followed by a very strong flowery hop bitter finish. It is extremely well balanced between the strong, alcoholy malt and flowery, hop bitterness. It reminded me very much of  a beer they used to brew at the Boston Beer Works called the Eisbock. ( The "Eisbock" was this beer, only turned up to 11- the alcohol vapors coming off an Eisbock were so strong that you had to keep the glass moving on the table or the fumes would peel the paint on the ceiling. And the taste was so strong it made you gag, but in a very good way)

When suffering though a heat wave like the one we just endured, I look for lighter, more drinkable beers to quench my thirst. Big, ten percent ABV beers are awesome, but when its 103 and humid, I just want a refreshing, well made small beer that won't make me pass out in the heat.

But finding a really good small beer, aka a 5% ABV beer, can be a challenge these days. Everyone is brewing big beers. Not a bad trend, but size isn't everything. And often times the simple basics of a great beer get lost (or masked) in the high alcohol taste of bigger beers. I wanted a small beer, damn it, but it had the have "big beer" flavor.

As I wandered the aisles of the liquor store last week, I walked by the shelf with the Great Divide Brewing Company beers several times. I stopped and pondered. I've had several beers from Great Divide before, and they never disappoint.  And I mean never. While my favorite brewers-Dogfish Head, Harpoon, and Stone Brewing- have all brewed art least one beer that I've not liked, I can't say the same for Great Divide. I've LOVED everything I've drank from them- the Hercules Double IPA, the Oak Aged Yeti stout, and the 17th Anniversary Wood Aged Double IPA. So why don't I buy more Great Divide I thought? Great question, to which I had no answer. So I picked up a 6 pack of their signature beer. 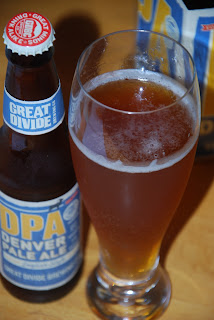 The label calls this an "English Style" Pale Ale. I think this means its going to be more balanced in comparison to American style pales. I particularly like the logo on the bottle that says "great minds drink alike".

The label also says that "Denver Pale Ale is a world renowned classic pale ale with a malty middle and equally hearty compliment of hop aroma and bitterness".

World Renowned? Talk about tooting your own horn! I wondered if they could back it up.

The beer pours a light amber color, clear, with a tight white head. Its a nice color, but it definitely doesn't look like a "pale" ale. (I guess its time I learn that "pale" refers more to the style than the color.)

Smell is, in a word, AWESOME. It smells like warm white bread coming out of an oven- yeasty, doughy, with a malt back. I get no hop smell, but I don't care. 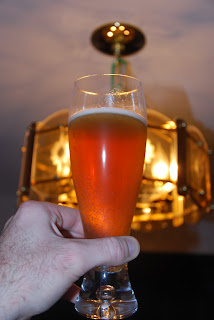 Mouthfeel is light, crisp, wet. Moderate to light carbonation on the tongue.

Taste- Yup, same as the smell, which is to say AWESOME. You get the taste of warm, freshly baked white bread, followed by some maltiness, then a moderate hop bitter finish, and its all in perfect balance. Its amazing. Its refreshing. Its comforting. Its super satisfying and thirst quenching.

I tried to look up the malt and hops used in this beer, but the web site didn't seem to list them. Several additional online searches also revealed nothing about the recipe. I guess they want to protect their "world renowned" status by keeping it a secret, and I can't blame them.

This beer is an easy 4.5 out of 5. And I think I now believe the "world Renowned" claim.

Vacation recap, Weasling out of things, and why the posts are lacking lately

I wanted to take a moment to catch up on a few beer related thoughts from vacation, and to also explain why the posts have been lacking lately.

1) Why the posts are lacking

My wife and I are expecting our second child in December. In preparation, we need to move our daughter into a new bedroom. This requires me to remove the 3 layers of ancient wall paper from this room so we can paint and decorate it appropriately for a 2 year old. In an effort to motivate myself, I pledged "no beer until all the wallpaper is down"!

Yup, I gave up beer again. This time for only about 14 days. This also explains why I stayed up until past midnight on Monday to finish the job. I wanted a beer, damn it! The reviews I've posted recently have been from notes I took over vacation. (I thought it was a good idea to have some reviews in the bank in case I suddenly lacked time/energy to write.)

Luckily, the job is done, and I have an awesome new beer for you later this week.

2) Weaseling out of things

"Marge, don't discourage the boy! Weaseling out of things is important to learn. It's what separates us from the animals! Except the weasel."
-Homer Simpson

So, that deal I made with myself above? I found a loop hole last week and weaseled out of it. It was so hot last week, and the wallpaper scraping was so bad, and the pinched nerve in my back was hurting sooo bad, that I desperately wanted a beer. However, I had made that promise to myself about not having a beer until all the wallpaper was down.

Luckily, I made no such promise in regards to WINE! Now, I'm not really a wine guy, but I had a cold bottle of Yellow Tail Riesling in the fridge that we had never opened. So, I popped it open and had a few glasses. A few sips in I understood why it was on sale- it was not good. Yellow tail makes a great Riesling, but this one was skunked. After the 3rd glass (it wasn't too skunked, after all), I dumped the bottle.

3) Vacation Beer recap- I drank a few beers on vacation. You saw the post about the Dogfish Head 120 Minute IPA? That was the best. But there were other awesome contenders- (lets see if you can guess where I went drinking???)

Basically, the rest of my vacation was spent watching the Tour de France. No, I'm not joking. I freaking LOVE this event. I got into it a few years ago, when my daughter was a newborn, and my wife and I would be up at all hours of the night feeding her. The only thing constantly on tv late night was tour coverage on Versus, and I watched very night. And I still do! I'm really rooting for Andy Schleck to finally win this year after finishing second the last two years, but it isn't looking good.

Anyhow, that's what I've been up to lately. I'll have a review of an awesome English style Pale Ale later this week.

Cheers, and thanks for reading!
No comments: