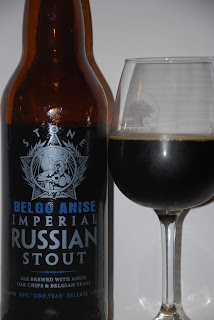 It's Friday, and that means at 9pm, I'm watching "Fringe" on Fox!

The show is dark and complex, and it really pushes the limits creatively. When I watch a show this intense, this well produced, I want a beer that is equally well produced and intense. One that pushes the envelope of creativity, style, and most importantly, taste. I want a beer to challenge and please my palette in the same manner "Fringe" challenges and pleases my mind.

In the craft beer world, few, (if any any), push the envelope further, or more aggressively, than Stone Brewing.

While wandering the aisles of Julio's Liquors this afternoon, I noticed that they still had an ample supply of Stones odd year release "Belgo Anise Imperial Russian Stout". This beer had gotten great reviews in the press, and I love Anise, so I've been dying to try it.

Without further ado, here's the review! 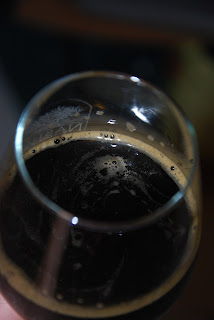 This beer pours pitch black, with no head, only a thin, dark brown bavarian ring, with an oily sheen.

Smell is malty, with notes of dark roasted coffee, anise, alcohol, and even hops present.

Mouthfeel is full and oily, with alcohol warmth on the tongue, and sensations of vanilla and wood.

Taste is complex, very BOLD, yet oddly balanced- alcohol is noticed first, followed by woody oak and hops, dark roasted malts follow, with vanilla and anise and a spicy warmth overwhelming everything else. Vanilla and woody oak notes round out the aftertaste.

This is an excellent beer. Brewed with warrior hops and bavarian yeast, its aged on oak chips that mellow out all the strong personalities of the components and deliver a surprisingly drinkable 10% abv beer. I do wish that the ABV was lower so that we could get a better distinction between all the ingredients in this beer, but perhaps that would be too much flavor and taste, even for Stone.

Friday marked the return of my favorite TV show, the sci fi epic Fringe, on Fox. To mark its long awaited return, I wanted a beer that would fit the sci fi subject matter and the "push the limits" attitude of the show.

As I walked the aisle of Colellas  Supermarket in Hopkinton, I saw a bottle of Blue Hills Brewery's Antimatter on the shelf. 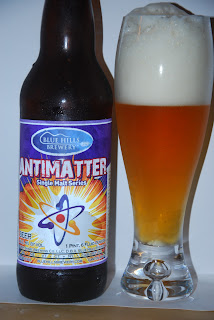 The little atomic symbol on the bottle spoke to me, and I knew I had found the perfect beer to enjoy while watching Walter Bishop save the universe.

The concept behind this series is simple- only one type of malt, and only one type of hop is used in the beer. In this case, we have two row malt, and Amarillo hops. As there are no other malts and hops to mix and mellow the characteristics, what you should get is a really distinct beer with a lot of personality.

This beer pours a beautiful orange color, with the largest, puffiest cloud-like head I've ever seen. This photo show it after its come down a good 3 inches from the original pour.

Smell was reluctant at first. This beer really needs time to breathe, as no aroma can escape the huge head of foam it produces on the pour. So pour it and then walk away for about 5-10 minute before coming back. When it has had time to breath, the smell is very bready, fruity and spicy. Lots of spice in the nose, all thanks to the Amarillo hops.

Mouthfeel is full bodied and very fizzy. Lots of activity on the tongue, as the image on the label suggests.

Taste is very nice- bready and spicy, like the smell. Lots of malt, and warm, aggressive spice notes on the finish. Its a very clean, distinct, unique taste.

The label suggests that this beer is "destined to be a favorite of session beer fanatics", but I disagree. While I loved the taste, the aggressive spice of the hops and the abv make this beer "un-sessionable" in my opinion. Its just  got too much character- if the spicy doesn't ruin the palate, the alcohol content will.

This is one of the most unique beers I've ever had. I give it a 3.5
No comments: 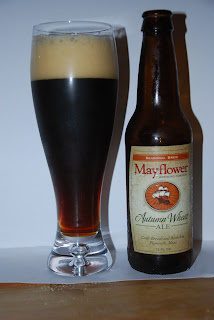 My apologies for the long delay between posts. We're still getting over IPA month here at Man Drinks Beer. So hard to say good bye to a month of delicious, over the top hoppy brews.

It was difficult to choose a beer to make the transition from summer to fall.

However, bringing your two year old with you to the "bottle store", (as she calls it), has a way of inspiring one to make quick decisions when selecting a beer.

For example, say you're foolish enough to put her down, thinking she'll stand still and be good while you carefully peruse the selection of craft beers. Because a store full of shinny glass bottles with bright colored packaging won't stimulate a two year to go running up and down the ailes of the refrigerated beer section, pointing to each door and yelling at the top of her lungs "beer beer beer beer beer" while other patrons laugh and try to walk around her. 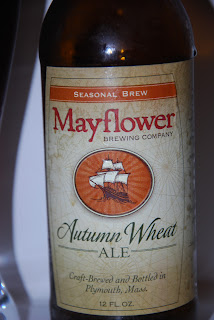 When I was able to catch her and pick her up, she happened to be standing next to a display of Mayflower Autumn Wheat. It was within arms reach, and I like Mayflower Brewing, so that was my pick. As the clerk rang us up and placed the 6 pack in the paper bag, my daughter pointed to the bag and informed the clerk "beer in there".

I think maybe I bring her with me too often to the liquor store, but she has a ball. Anyhow, lets welcome fall and talk about....

This beer pours a dark, dark brown color- which when held up to intense light appeared deep, deep red- with two fingers of loose, puffy, off white head.-

Smell is bready- yeasty and malty. A few swirls of the glass releases more aromatics- more roasted malts, and a burnt coffee aroma. There's also an unexpected hint of something sweet- maybe bananas, some kind of fruit note. Its very nice. 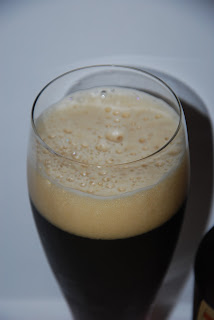 Mouthfeel is full bodied and active. Almost rich, but not quite. Definitely has the characteristic feel of a wheat beer, despite the slight heft. Very smooth and warm.

Taste seems to be built by the roasted malts- lightly burnt toast-like at first, then very yeasty, with hints of coffee. There is a very subtle sweet, fruity aftertaste.  That's gotta be the yeast,  but the Mayflower web site doesn't reveal the yeast or hop varieties used, so we're left to wonder.

This beer has a very unique taste- earthy burnt coffee and bread, followed by an unexpected, subtle, sweet, fruity aftertaste. And there is no bitterness. Its very smooth and drinkable. This is a great fall beer. Not a heffewiesen type wheat beer.

West Coast IPAs are quickly winning me over.

Harpoon IPA has long been my "go to" beer. Its a superb IPA- great hop aroma and taste, very well balanced by the malt, with a modest ABV- which, in my humble opinion,  makes it the ultimate session beer. And of course its brewed in Boston, which never hurts, as I'm a lifelong Bostonian.

But as I close out IPA month in this space, I must acknowledge that the west coast is making some damn fine IPAs as well. And as I look over the brief history of this blog, I noticed a glaring omission among the many great breweries mentioned here. 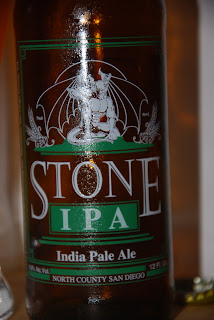 Where the f*ck is Stone Brewing, of Escondido, CA?

How could I neglect to include Stone in this blog! This is beer blog blasphemy.

I first discovered Stone Brewing while working a security gig. My job this fateful night was to watch the bar. As I sucked down sodas and "escorted" over-served patrons from the establishment, I noticed that all the beers on tap this night were from Stone Brewing, which I had never heard of before. I also  noticed a very attentive sales rep from Stone checking the taps every few minutes. So I did what any good, thirsty security worker would do- I talked up the sales rep. All night.  I ask him about Stone, where they were from, if the beer was good, etc.

Fast forward to 1am- the event is closed, venue is empty, and I've talked the sales rep into letting the security staff help drain the taps (can't let that beer go taste!).  We're drinking Stone Smoked Porter, IPA, Arrogant Bastard, and talking about how great it is to get "good beer" after a gig.

Fast Forward to 2am- After we offer to help him lug the empty kegs to his van, the sales rep is now literally giving Daupha and I case after case of samples from his personal stash of Stone. And he invited us to a Stone Tap Takeover the next day.

All in All, he made quite an impression, as did his beer. I've been a huge fan of Stone Brewing ever since. 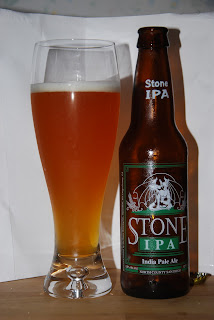 Smell is citrusy hops, strong and vibrant, maybe grapefruity. The aroma actively seeks out the nose, you don't need to swirl the glass to release the aromatics.

Mouthfeel is full bodied, rich and creamy on the tongue and palette. A slight warming sensation from the alcohol is also detectable.

Taste is excellent- strong, bitter grapefruit hops (Columbus, Chinook, and Centenial Hops are used) come first,  followed by a light malt/yeast backbone to give a slight and unsuccessful attempt to balance off the overwhelming bitterness of the hops. Then a warm alcohol sensation and a very bitter but clean, dry finish.

An excellent IPA. Excellent citrus hops taste and follow through. A solid 4+ on my 1-5 scale. Almost sessionable, but the ABV (6.9) and IBUs (77) probably make it just a bit too bitter to be a true session beer.