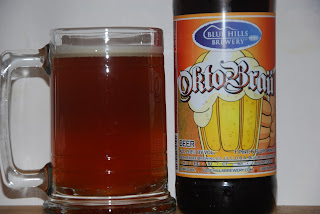 This time of year I am always conflicted by this dilemma- Octoberfest or Pumpkin Ale?

I love Octoberfest beers. The style is one of my all time favorites. Dramatically under appreciated and too limited in production, in my opinion, a good Oktoberfest beer is supremely drinkable, perfectly balanced between the malt and hops, and perfect for those cold fall evenings.

But lately it seems that the pumpkin brews have stolen all the shelf space from the Octoberfests. Now, I love fruit in my beer (yup, a pumpkin is a fruit, I looked it up!), but do pumpkin ales deserve to steal all the spotlight from the long standing king of fall beer styles?

Recently I set out to answer that question. I went to my local liquor store in the hope of purchasing the latest and greatest pumpkin ales, and was prepared to compare them to the undisputed king of all Octoberfest beers- Wachusett Oktoberfest.

However, my local package store was almost totally out of pumpkin ales. What was left was exclusively faux craft ale or pumpklin ales with exceedingly bad reputations, so I needed a new plan.

How about a battle of the Octoberfest beers? But, scanning the shelves again, this style too was woefully low in stock, and unfortunately, so was my wallet. So I decided to economize and grabbed a 22oz bottle of Blue Hills Brewery's Oktobrau. Blue Hills Brewery has given this blog some great beers in the past, so it wasn't a tough call to make.

So the answer of which style reigns supreme- Pumpkin or Octoberfest- will have to wait for now (write in with your thoughts, I'd love to hear them). 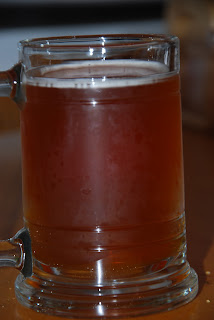 This beer pours a nice honey brown color, appears slightly cloudy, with a thin, tan head that immediately collapses and leaves a light lacing on the glass and surface.

Smell is malty, yeasty, and bready. It's a modest aroma that doesn't want to leave the glass.

Mouthfeel is thick and substantial, very bubble on the tongue and pallete.

Taste is surprisingly sour and tangy (from the yeast?). Almost Belgian like, but without the fruity sweetness. I'm really missing the depth of flavor from the malts and conditioning you usually get in a marzen style brew. Finish is tangy and harsh. It overwhelms what should have been the wonderful taste of  the Hallertau hops and Munich and Vienna malts.

Overall, this beer really disappoints. A rare swing and miss from a usually strong brewery. I wouldn't consider this an Octoberfest style beer, and maybe its not even meant to be one. It has none of the drink-ability and smoothness you'd expect from the style. I give this a 1.5 on my 1-5 scale. To be fair, I've had many brews from the guys at Blue Hills, and this is the fist one that I'd call less than great, so that's a pretty good track record.
No comments: 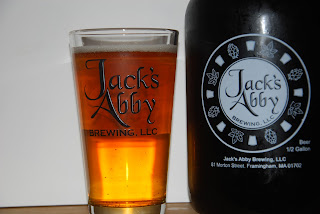 It's not often that a brewery opens near your home.

So when Jacks Abby Brewing opened in Framingham this past summer, I made it a point to show up opening day, on my lunch break, to check it out. I think it was a Thursday, and they only had two beers on tap, the Red Tape Lager, and Saxon Sons Pilsner.  Of course I sampled both, thought they were great (the pilsner, in fact, is waaay beyond great, but that's a story for another time), and I was immediately back on Saturday afternoon for a growler of each.

But it was only recently that I was finally able to get back there to try the beer I've been absolutely craving- the Hoponius Union India Pale Lager.

Yup, that's right, this is not an India Pale Ale, it's an India Pale Lager. If you've read this space previously, you know I love hops, and that I have a somewhat unhealthy obsession with IPAs.

But an India Pale Lager?I emailed Jack Hendler, the owner and brewer of Jacks Abby, with a few questions about the style and the beer itself, as I've never heard of an IPL before. Here's what he had to say about his Hoponius Union IPL-

"The Hoponius Union, like all the beer we brew here, is in fact a lager. The one small difference between the rest of our lagers and the HU, is that after primary fermentation we do condition this beer "warm" at 50-55 while we dry hop this beer...twice, before we crash down toward freezing to lager the beer further. This allows for a greater dry hop aroma. We don't filter any of our beers. We fine them to make them clear or bright. This process is most useful with our Hoponius because it allows all the hop flavors and aromas to stay in the beer. We like to call this beer and India Pale Lager. I know of at least two others, but its a non existent beer style. The goal was to create a harmonious union between west coast IPA hop flavor and aroma and lager fermentation."

You simply have to respect a guy who creates a beer style! 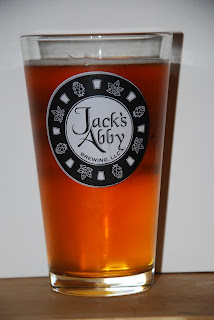 This beer pours a beautiful light copper color, with a nice two fingers of white head (the photo doesn't here doesn't do it justice). The head evaporated pretty quickly, and the remaining surface had a nice glossy sheen.

Smell is awesomely hoppy, very sweet and floral. Its a big, beautiful hop aroma with hints of citrus.

Taste is big- hoppy and bitter, but not over the top. It's clearly unbalanced towards the hops, and this is a great thing.  It's very bright and crisp, with a touch of citrus, and a hint of spice. The Citra, Amarillo, and Centennial hops create a truly unique hop profile that is big on taste and surprisingly light on the bitter.

I loved this beer. Its huge on hop smell and taste, and very modest on the bitter side. There is something to be said for locally brewed beer that is made with great skill, quality ingredients, and an adventurous brewer. If you haven't been to the Jacks Abby Brewery in Framingham, do yourself a favor and check it out (just don't wear a t-shirt with a competing brewery on it, or they may give you some good natured grief). Check out their web site for tasting room hours and local bars that have their beer on tap. Currently their beer is available only by growler at the Framingham Brewery, or on tap at local bars and restaurants.

Special Thanks to Jack Hendler for his quick response to my questions. (And a huge apology for misspelling the name of the brewery in the initial posting.) 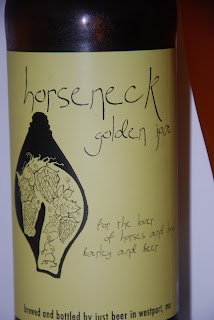 I'd never even heard of "Just Beer" brewing, in Westport, MA. My Uncle Jack and his wife took a day trip there, and he brought me back a bottle. So I consulted the Just Beer website. It looks like the beer is really distributed only very, very locally in the Westport area. Explains why I hadn't seen it anywhere.

Here are my thoughts on this brew-

This beer pours deep golden orange, with a nice 2 fingers of off white head which quickly dissolved into an oily sheen. 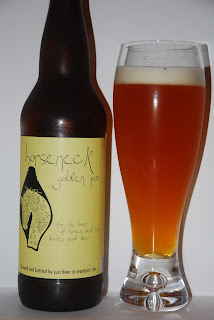 Aroma is mildly hoppy, with what I can only describe as minerally, citrus like hints.

Taste is hop bitter without a ton of flavor. There is a mineral like aftertaste, and a very bitter, distinctly grapefruit finish.

Overall this beer looks great, smells about average, and tastes about average for a craft IPA. It really needs something to counterbalance the minerally aftertaste and bitterness. Bitterness can be a great component of the craft  beer drinking experience,  if there is taste with it.

The Just Beer web site is a very old school, minimal info site, so I wasn't able to get any info on the varieties of hops used, or the IBUs for this beer.

Did you hear the one about the guys from Dogfish Head and Google making a beer together??

No joke, this is absolutely true. You really just need to watch the video. Its 13 minutes long, but it's awesome.

Not sure if the beer is available outside the Dogfish Head brew pub yet. I'll let you know if I hear more.