Old Crafty Hen- A Vintage Ale from the UK 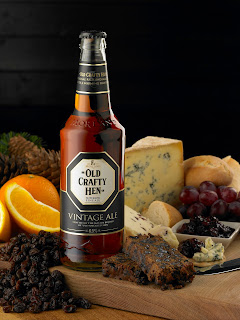 At the very end of October ( just before the dramatically early and unexpected birth of my second daughter), on a very rainy night just before Halloween, I had the pleasure  of meeting with brew master extraordinaire John Bexon, Head Brewer at Greene King Brewing and Brands of Bury St Edmunds, Suffolk, England.


How this humble blog caught the attention of a renowned British Brew Master is beyond me.
John was in town to promote the US release of Old Crafty Hen, a vintage ale that's been available in the UK for a few years, but is only just now available in the US. This beer is actually a blend of a mature, strong ale- Old 5X, which is age in oak vats for several years- and a fresh ale, Old Speckled Hen.
I meet up with John at the British Beer Company in Framingham. I got there early, and was on my second Old Crafty Hen when John arrived.

When he asked me what I thought of the beer, I told him that it was not what I had expected, that I found it a bit "harsh", to be honest.

At this comment, he reached out,  grabbed my pint glass, and made two observations that only a brewmaster could make.
"First", he said, "this is too cold. It should be slightly warmer. And, it should be served in a wine glass." He explained that this would allow the aroma to better collect and not be as overwhelming, and would allow a drinker to better distinguish and appreciate all the elements of the beer.
John then gave me some of the malts he had used in the brew to chew on, something I'd never done before. This exercise really helps the taste buds understand what each malt used in the brewing process contributed to the beer.
We talked a bit about US beer styles vs UK styles, ( a topic for its own post, another time) and he was kind enough to send me home with a sample of Old Crafty Hen to sample for this post.

So, without further ado.. 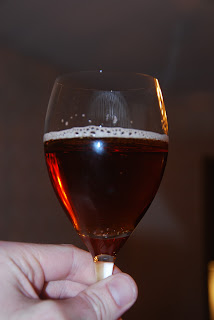 Old Crafty Hen
Green King Brewing, Bury St Edmunds, Suffolk, England
6.5%ABV
This beer pours a deep red brown, bright and clear, with a tan head that dissipates quickly, leaving minimal lacing on the surface and rim.
Smell is complex and strong. Essence of oak and  dried fruit (raisins?) are detectable, as is a hop sweetness. Presence of alcohol is surprising, reminds me mildly of a port aroma.
Mouthfeel is full, with light carbonation.

Taste is as complex as the smell indicates- hints of oak, and a biscuity bread like flavor from the Pale and Crystal malts. This is followed by hints of vanilla, then hops (Challenger, First Gold, Goldings, and Target are used) and malt flavors that are strong but balanced. The "harshness"  I reported to John is definitely dried fruit-raisins, maybe plums- and these add a touch of sourness to the profile. Finish is surprisingly mellow.
This beer challenges the palette of the US craft beer drinker, which may not be prepared for the potpourri of flavors that are all so well balanced.  Not a session beer by any means, this beer is to be savored and enjoyed, I'd suggest in an easy chair by the fire.

Note-When I learned that this was a blend of a strong ale and a fresh ale, I had expectations of  a taste similar to a Dogfish Head Burton Baton, which is also a blend of a strong ale and pale. However, these two blended beers are extremely different, and the differences really  showcase the stylistic and philosophical differences between European and US brewers.
No comments: