Continuing the friends and family theme for July with one of  two beers brought over from Sweden by my friend Karin.

Karin acquired these beers while she was in Stockholm to run the Stockholm marathon (this was her 8th marathon, I think?). She is a close friend who has the annoying ability to both out-write  (her blog, which she recently retired, had a large following and was picked up by Boston.com more than once. Even her emails are exceptionally well written) and out run me. (Except for that one time during the Harpoon 5 Miler when she didn't see me coming down the final stretch and I was able to run by her in the chute for a 1 second moral victory. Sure, I probably broke several rules of running etiquette, but a win is a win, right?) Since I moved to the burbs a few years ago, I've really missed our evening runs through Southie, which were usually followed up by great conversations over dinner and drinks. 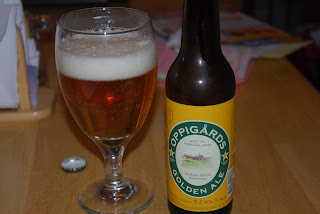 Reviewing a beer brewed in Sweden, when the brewers web site is in Swedish and you don't happen to speak Swedish, or know anyone who speaks Swedish, is a bit of a challenge, I will admit. After much digging, I found a great web site called Great Brewers, who had this information about Oppigards:

(The following quoted info is copied directly from Great Brewers.com)

"Oppigårds Brewery sits on the 250-year-old Falkeström family farm, in a tiny wooden building. Constructed in 1696, the space was once used for flax-dressing, and great-grandfather Falkeström also housed a farm smithy there. Today, while the farm is no longer operational, the building is still put to good use. Now, Bjorn Falkeström uses it for brewing. With the addition of a malt crushing room out back, all Oppigårds beers are brewed in the old place. The brewery allows the Falkeströms to make their livelihood on the farm, as they have since the mid-1700s.

Bjorn Falkeström founded Oppigårds in order to revive not only the family farm, but also traditional Swedish farmhouse ales, which were the norm in the 1800s until a wave of generic, modernized, breweries took over. With their efficient labor practices, refrigeration, and yeast cultures, the large breweries made farmhouse brewing unprofitable, and it all but died completely.

Today, Oppigårds Bryggeri uses recipes from these small farm breweries. This doesn't mean Bjorn is against advances that help craft a good beer. His brewery is based on modern technology and quality, combined with old recipes and traditions. He brews a variety of deep, colorful ales and is excited to be an independent Swedish craft brewer."

This beer pours a bright golden, clear, with lots of bubbles and a thick, airy, white head that never recedes. Great head retention on this brew. 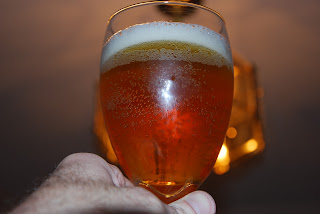 Smell is almost non-existent- Some faint yeasty esters is all you get.

Mouthfeel is soft, light and smooth.

Taste is mild- some hoppy bitterness nicely balanced out with malt, with a dry finish that lingers a bit bitter. If I've translated the brewers web site correctly, they used Golding and Cascade hops and Carapils and light caramel malt.

I'm going to assume this a craft beer by Swedish and American standards. Anything being brewed in a 250 year old wooded farmhouse couldn't be anything but craft, right? I enjoyed this beer.
No comments:

Yes, you read the headline right. This post is about a beer brewed to taste like bacon- maple smoked bacon, to be exact.

(OK, He isn't really lost. He moved from the big city of Boston to the woods of western North Carolina a few years ago. I'm still trying to lure him back.).

BO, as I call him, is a former US Marine. His unit was one of the first through the mine fields in the original desert storm. When he finished serving his country, he came home to Boston and took a job with the security company I was working for at the time. We met at Au Bon Pan at Harvard Business School for coffee on his first day. We hit it off immediately. Brendan is a friend that I respect, admire, and look up to immensely. He sent me this beer, (and another from his wife which I'll write about later) because, as he says, when he saw the description, it reminded him too much of Homer Simpson to not send it (BO knows I am a fanatical Simpsons fan). 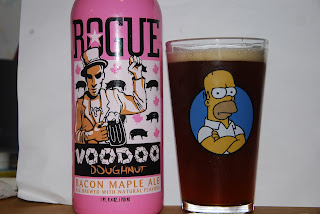 This beer is made in collaboration with what I believe is a local doughnut shop in Rogues home town of Newport, Oregon- Voodoo Doughnut.

To create a beer that tastes like a maple smoked bacon, you need a lot of ingredients-

13 Ingredients, to be exact: 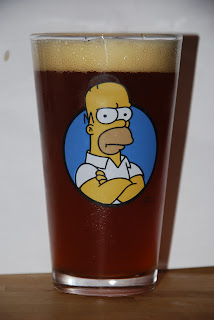 This ingredient list oughta tell you that this is no normal beer.

This beer pours a hazy, murky dark orange, with a fluffy cream head that dissipates quickly, leaving light lacing on the surface and glass.

Smell in insanely, powerfully smokey- intense hickory and applewood evoke the essence of bacon almost immediately. Its downright frightening, to be totally honest. There is a subtle hint of underlying sweetness that is revealed by swirling the glass a bit.

Mouthfeel is equally insane- I know I just put liquid in my mouth, but my senses tell me I just did a massive bong hit off a hickory and applewood flavored stash. My mouth is literally texting me "WTF".

Taste is...holy smoke! Its freakin' bacon folks! Hickory smoke, applewood smoke, and hints of maple tell the brain that yes, you did just drink alcoholic liquid bacon. That subtle, underlying sweetness that presents in the nose during the pour? Its dead, gone, probably died of smoke inhalation.

I don't know what to say about this brew except that it is totally freaking insane. Recommended only as a novelty for those who want to say they drank bacon beer. Rogue makes many other excellent beers that still push the envelope, so I'd suggest seeking out those.
No comments: 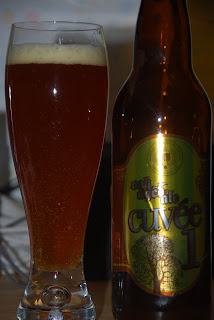 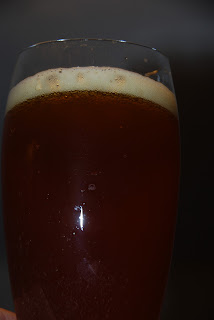 July is Friends and Family (with beer) Month here at MDB

Its July second. My last post in this space was in May.

So, where the hell have I been?

Dealing with life, that is all. Very Glad to be back on the blog.

This time off has given me some much needed perspective on life. It has also instilled a greater appreciation for the friends and family who are always there when it counts. Whether it be reading this silly blog, or going to a wake (or two) for someone you didn't even know, these people just keep showing up because they care, and damn it, that's a pretty cool thing.

Accordingly,  I've decided that July is "Friends and Family" month here at MDB. It'll feature great beers and the even greater people that brought them to my attention in the first place.

Our first honoree this month is....

He brought me this beer (ok, he's brought me many beers over the years, but this one is super intriguing): 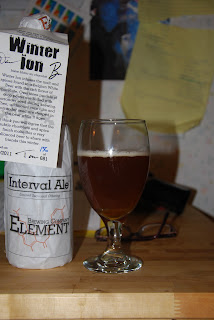 You know him as "Daupha", from previous reviews too many to mention. He also happens to be the person responsible for my introduction to craft beer, no small thing that be!

Daupha is the kind of friend who is always there if you need something. And if he happens to find something he thinks you'd like and you're not there, he just gets it for you and brings it to you.

He wanted to give me this brew as a Christmas gift, but of course I got busy with the family and didn't see him until about 4 months later. 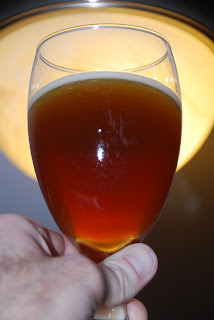 I had never heard of Element Brewing. Here is what their web site had to say:
"Winter Ion is the fusion of a Belgian White with the rich flavors of chocolate. Over 3 pounds of chocolate are boiled with fresh coriander seed. With a hefty malt and low bitterness the chocolate and subtle spice make a balanced brew perfect to share with friends this winter"
This beer pours hazy orange, with a low hanging yet airy and substantial head that refuses to leave.
Smell is intriguing- sweet, with hints of dried fruit and chocolate, malt notes, and alcohol.
Mouthfeel is heavy. Much more substantial than it appears. Chewy almost.
Taste is complex- alcoholy and chocolaty up front, spicy peppery follow through and finish.
A very complex beer. Belgian White Beer spices, mixed with (what I am guessing are) darker roasted malts and chocolate to create a very aggressive, assertive taste.  Recommended for those seeking an aggressively flavored Americanized Belgian White. I thoroughly enjoyed it.
Thanks Daupha!
No comments: