The Great Debate- Pumpkin vs Octoberfest

You didn't think I meant that other debate that happened the other night, did you?

No, here at MDB we concern ourselves with far more important issues, like "which fall beer style style do you prefer- Octoberfest or Pumpkin?"

Clearly there is no wrong answer, but there are definitely opinions worth discussing.

For this discussion I've chosen two local Massachusetts beers that are about as similar as you get when comparing the two styles. 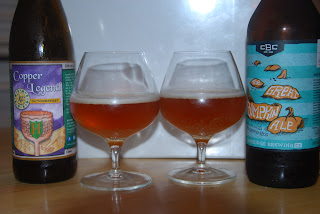 Octoberfest beer has traditionally run the gamut from Vienna style Lagers, to Bavarian Dunkels, to reddish brown Marzens. There isn't a strict style definition. In Germany, the only rule for a beer to be served at Octoberfest is that it must be produced within the city limits of Munich, by one of the largest brewers in the city (Spaten, Paulaner, Lowenbrau, Hofbrau, Hacker-Pschorr, Augustinerbrau Munchen) . Today, most run between 5.8 %and 6.3 % abv, and as they are mostly "lagers"- made with bottom fermenting yeast that works at lower temps over a longer time period, requiring more condition time- they produce a crisp, clean tasting beer, with more moderate, malty, bready flavoring.

Pumpkin Ales are far more diverse. The style originated in America, which may partly explain their popularity here. I've seem Pumpkin in both Ale and Stout style, and in both Imperial (10%+) and "small beer (4-5%)" ABV levels. How they are brewed also varies greatly. Some brewers use pumpkin puree, some use roasted pumpkins, some use yet a different preparation. The point at which the pumpkin is introduced into the actual brewing process differs as well- some brewers add it to the mash, some to the kettle. Some also add spices, going for a more "pumpkin pie" flavor. The variations are immense compared to Octoberfest style beer. In this case, we have an "ale" pumpkin style, which simply means it was brewed with top fermenting yeast, that works at warmer temps and works faster, requiring less condition time. Ales also tend to produce beers with stronger, more identifiable flavor profiles.

Both of these beers are comparable in ABV- Jacks Abby Copper Legend checking in at 5.9% ABV, and Cambridge Brewing Great Pumpkin at 4.4%.

How do these beers compare head to head? Lets find out. 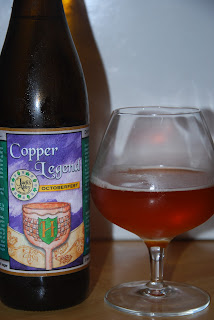 Pours a clear honey brown, with a large, puffy, off-white head. Good head retention and lacing on the glass- lots of puffy white foam on the surface.

Smell is bready, maybe a touch a citrus, but very mild and nice.

Mouthfeel is soft and light, with a perfect amount of carbonation.

Taste is very mildly bready up front, like a warm toast almost. This segues to a fresh, biscuity flavor, which is when you notice a subtle touch of maltiness. Finish is clean and crisp, with absolutely no aftertaste.

Overall, the flavors here are great, but very mild and unobtrusive. This beer is happy just being a great beer, it doesn't want to do anything but be enjoyed, and I love it.

And now, the Great Pumpkin Ale. 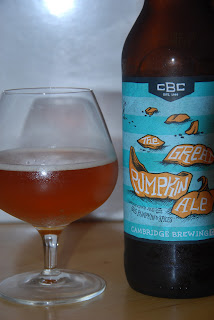 A low head of tight, white foam assembles on the surface, but receded after a minute, leaving a nice Bavarian ring on the glass, but not much on the surface.

Smell is sweet, and you immediately notice the pumpkin spice- nutmeg maybe? I'm not getting much else, and its very nice.

Mouthfeel is also soft and light, with maybe an eyelash heavier weight than the octoberfest.

Taste is pumpkin sweet at first, mild but obvious. Spices are very muted, but bring in a nice sweetness to balance off the stronger malty, bread notes. There is an underlying, rich, sweetness in the finish that I cannot identify, buy I love it.

This is a great pumpkin ale. Its got wonderful pumpkin flavor, but doesn't overwhelm you with spices. Its clearly a beer with pumpkin, not vice versa.

Both of these beers are fabulous, and I strongly recommend you to seek them out and try them for yourself.

But for my money, I am an Octoberfest guy. I love the simple, refreshing taste of a well made lager. Keep it simple and to the point. On a cool fall day, nothing hits the spot for me like an Octoberfest beer.