Time to drink in a bit of beer history friends.

Thanks to Jim Koch and the fine folks at Samuel Adams, who recreated this beer for people like us, we can now experience THE beer that started the craft beer movement in the United States.

How's that for hype?

New Albion was started in 1976, by Jack McAuliffe, a Navy Veteran back from Europe who was hoping to create the quality beers that he enjoyed while in Europe here in the states. To give you an idea of working conditions he was dealing with, there were only 44 breweries in the entire country at this time, and no one was manufacturing or selling small batch brewing equipment. (Today, there are more than 44 breweries in Massachusetts alone). Jack was up against it. Supplies were tough to come by- he had to brew using only Cascade hops, as that was all that was available to him at the time. His equipment was handmade. He lived in the brewery. This was a beer guy before there were beer guys.

New Albion Ale no longer exists, it closed in 1982. However, thanks to Jim Koch, who tracked down Jack, (and the original strain of yeast used to brew the original New Albion Ale!), we can enjoy a bit of brewing history ourselves.

For more information on New Albion Ale, check the Sam Adams web site, or The Oxford Companion to Beer (pg 606, to be specific) by Garrett Oliver 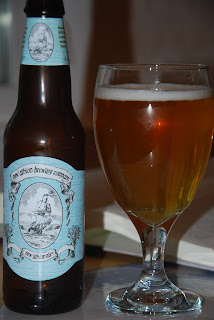 New Albion pours a moderate yellow gold, with a low thin head of white foam that collapses and dissipates quickly.

The smell is yeasty/bready up front. I was immediately taken back to my college days, and memories of drinking BMC beer. I couldn't detect a hint of hops.

Mouthfeel is light and pleasant, carbonation is moderate, no surprises.

Taste follows the smell- sort of yeasty and bready up front, followed by a slight hop bitter follow through and a very slightly sour/bitter finish. I didn't find this to be a complex flavor profile by any means. It tastes like beer. Good beer.

An absolutely fascinating beer. Keep in mind, this recipe is from 1976, and while the flavor profile might seem meek to the modern craft beer palette, in 1976, this must have a hop bomb of flavor. It is a very sessionable brew, and I did enjoy it. I'd buy it again. It strikes me a great "gateway" beer for the non-craft beer drinker.

Enjoy this beer for what it is- the God Father of craft beer. If you're expecting to be knocked out by massive ABV, or a west coast style hop profile, you'll be disappointed. But if you can enjoy it in its proper historical context, you should be all the more appreciative of where the craft beer industry stands today.

So, you ask, why is a beer guy telling you about a wine festival? 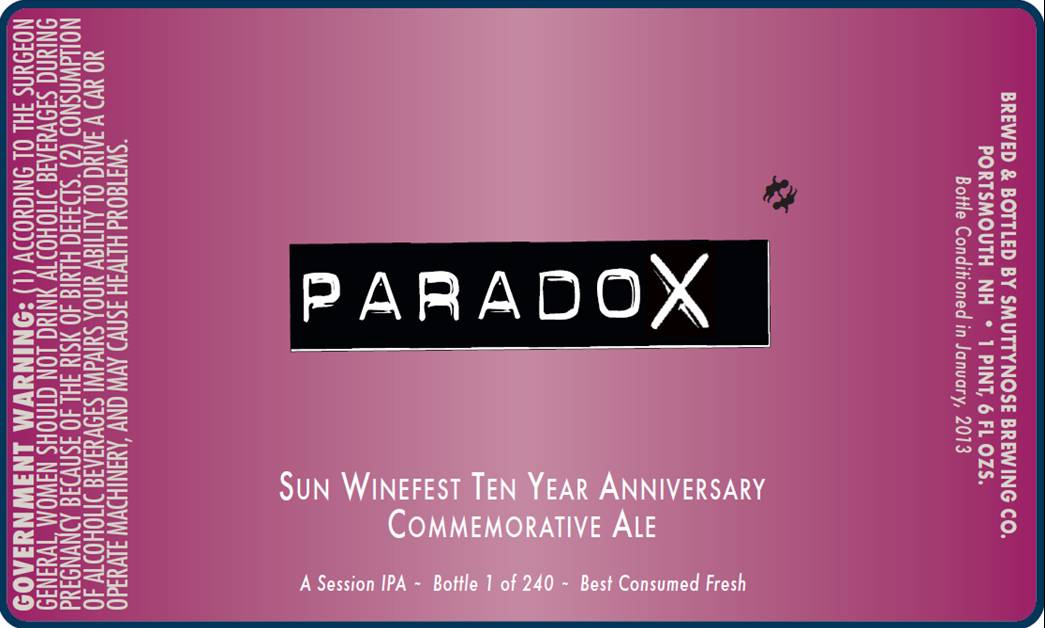 Because this wine festival will also be featuring the unveiling of a great new session IPA from New Hampshire's Smuttynose Brewing. The beer, dubbed "Paradox", has been specially created by Smuttynose Executive Brewer David Yarrington to commemorate the Sun Winefest’s 10th Anniversary.

A sessionable beer made from an experimental hop nicknamed  "lemondrop" (which, as you might expect, has a bright, citrusy, "lemony" quality), Paradox was specifically brewed to show the wine crowd that great beer can be paired with great food just as easily, and appropriately, as a great wine.

More on the great food in a bit. First lets talk about the beer...

I had the pleasure of tasting Paradox recently at a sneak preview event in Bostons Back Bay. Being the total hop head that I am, I had high expectations of this IPA, and let me tell you, Paradox did not disappoint. It pours a beautiful sunshine yellow, with a healthy two fingers of loose white head. Nose is bright and citrusy, with a pronounced hop presence. Body is surprisingly light- this is not a "big" heavy, IPA by any means. Taste is wonderfully hop forward, as the aroma suggested- very bright, with hints of lemon (surprise!) and  orange peel citrus. Finish is very clean, almost dry. Paradox has an almost west coast IPA feel to it, and I loved it.

I enjoyed Paradox in the company of several fellow beer writers/enthusiasts, and we were all in agreement that this was a very good IPA. At 5% ABV, it's also extremely sessionable, a paradox itself of the current high ABV IPA trend in the craft beer world.

And now, about that great food I was talking about....

As noted previously, Paradox was created to commemorate the 10th anniversary of Sun Winefest, (note the "X" in the name-also the Roman numeral for "10"- not a coincidence), but also to show the wine crowd that great beer can in fact be served along side great food and be every bit as appropriate, complimentary, and delicious as a great wine.

Executive Chefs Todd Winer of Met Restaurant Group and William Kovel of Catalyst were challenged to create several dishes that would be complimented by the beer. There was only one small problem- the beer hadn't actually been created yet. So they had to work off only the description of the beer that Smuttynose Executive Brewer David Yarrington had given them.

Let me say this- these chefs deserve serious credit for not "dumbing down" their menu knowing that their food was going to be paired with a beer instead of a fine wine. The food was tremendous, and as a "beer guy", I respect the hell out of these chefs for taking up this challenge to pair their great food with a beer that they didn't even the chance to sample before preparing dishes. I think it speaks volumes about their skill as chefs, and also about the respect/place great beer has earned at the dining room table.

Here are the dishes each chef prepared:

Fried oyster and pork belly Panini with creole cole slaw.
(This was my favorite plate at the tasting- it was absolutely amazing. I had several. Bad etiquette, maybe, but damn was it good)

All of these dishes were delicious and bursting with the crisp, fresh flavors of summer, and Paradox held up against each and every dish without overwhelming any of them. it was a perfect complement to each meal- flavorful, bright, yet light on the palette.

Wanna try this amazing food and beer for yourself? Click here to get more info and tickets to the 10th Annual Sun Winefest.

There are plans to release limited batches of Paradox in February. Check the Smuttynose web site for details. 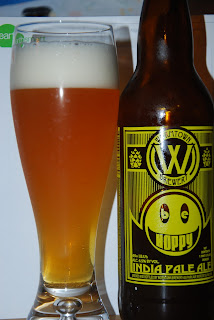 Last year, there were a lot of great beers that I enjoyed, wrote about, but never got around to posting, for one reason or another. Todays beer- Wormtown's wonderful "Be Hoppy" IPA- was originally intended to be featured during my IPA month in August.

Smell is awesomely, happily- and expectedly- hoppy. There are subtle spicy and bready malt undertones, but the bright, sunshiny hops are the star here.
Mouthfeel is light but very active- lots of carbonation and bubble action.
Taste is oddly mild, citrus bitter up front, nicely balanced out and neutralized  by a healthy malt profile. Finish is a touch spicy, bitter, and super flavorful. It leaves the palate lingering with an awesome fresh hop taste that I absolutely love.

A great IPA. I expected the 69+ IBUs to be devastating, but it wasn't, in fact, I found this beer extremely drinkable. Reminiscent of a west coast style IPA in that it leaves you with an abundance of bright, fresh hop taste, yet it doesn't overwhelm with bitter.
1 comment: