So I gave up beer for lent again this year, which is one of the reasons I haven't been posting lately. Life rearing its ugly, unpredictable, and sadistic head being the other. More on that in the coming months....

But before the lenten season began, I made sure to drink a lot so that I'd have stuff to write about during lent.

Knowing I was giving up beer again this lenten season, I was anxious to drink my fill of my beloved IPA's before ash Wednesday.  Perusing the shelves of my local bottle store, I stumbled across a special offering from Mayflower Brewing, a double IPA brewed to celebrate their 5th anniversary. 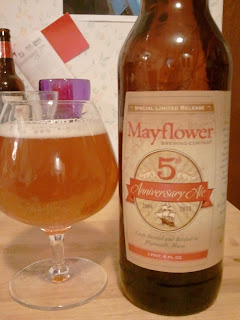 From the Mayflower Web Site:

"We are proud to celebrate our fifth anniversary this month with the release of Mayflower 5th Anniversary Ale. This limited-batch release is a double IPA with 8.2% ABV and five varieties of aroma hops. Look for it in 22 oz. bottles in stores starting this week."

I love Mayflower Brewing Company's products, but I often wish they put just a touch more detail on the web site so that beer fans can learn more about the fine beers they produce. At the end of the day, I'll take the excellent beer every time, but I am still darn curious about the hops used in this excellent beer.

This double IPA pours a bright orange/red, with a thin, loose, white head that retreats quickly, leaving only thin lacing on the surface and glass.

Mouthfeel is thick but not heavy, chewy, with low carbonation.

Taste is more subdued than the smell, but still wonderfully hoppy. More piney notes at first, and not as bitter as you'd expect given the nose. The deeply piney hops are balanced off by a subtle- I'm guessing crystal- malt bill that is really nice.

Awesomely smooth finish with just a token of bitter aftertaste.

This is an awesome beer. In my humble opinion, this is a double IPA that wonderfully represents the "East Coast" style IPA. It has that awesome hop smell and taste punch that IPA aficionado's crave, but its not over the top, and has good balance with the malt profile.

I highly recommend this beer, and Happy Anniversary Mayflower Brewing!
No comments: