So I've been training for another half marathon this fall-The Ashland Half Marathon and 5K- (which is this Sunday, btw), and I've pretty much cut out beer while I train.

Now I am certainly not a threat to win this race. I am not fast (think 9 minute miles here), or small (220lbs+). So why did I cut out beer? Simply, its because I feel that I run better when I haven't had a beer or two the night before. And despite my destined middle of the pack finish, I still like to train hard and try to maximize my performance for these races.

It's a lot of fun to train for an event, I've always felt that way. I feel like it gives you an entry into this great  fraternity of crazy people- who have trained for months, running long distances, willfully subjecting themselves to sore muscles, chaffing, occasional joint pain and exhaustion- all in the hopes having a good race- and I love that connection. Lining up at the starting line of a race with hundreds of total strangers, I always have this feeling of "these are MY people. They get me. Lets do this!". Just thinking about it now makes me want to get to the starting line!

Or maybe its partly a pending mid-life crisis. I do turn 40 fairly soon. But I don't think that's it. I've always been competitive and enjoyed challenging myself physically. Running is a great way to focus that energy and channel it in a positive way. And if there's a post run beer in it for me, whats wrong with that?

Anyhow, before I went beer free, I did allow myself to try a new pumpkin beer. Here are my thoughts on ... 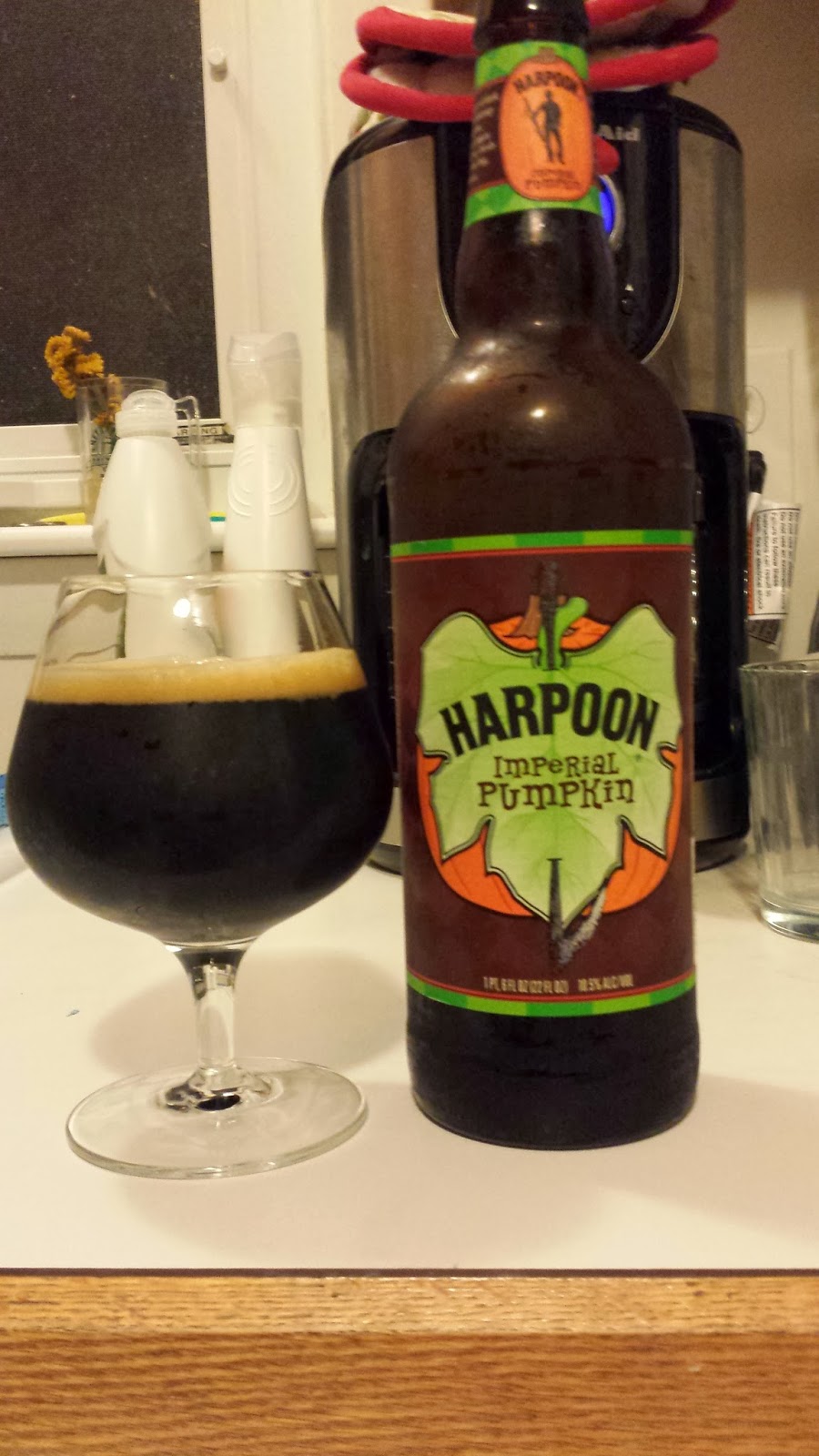 The bottle tells the tale about how the brewers at Harpoon were improvising a new beer in their 10 barrel kettle last fall and tossed in some pumpkin, molasses, cinnamon, nutmeg, a "touch" of ginger, and a "dash" of cloves. To quote Harpoon- "This Imperial Pumpkin Stout is big, rich, and spicy. Enjoy!"

Harpoon Imperial Pumpkin pours oily black, with a dark brown head that has almost no head retention, save for a thin Bavarian ring and some delicate lacing on the surface.

Smell is intense molasses, ginger and pumpkin spice, all equally represented and pungent. It's got a great aroma-  like a pumpkin pie baking in your grandmothers oven on a cold fall afternoon.

Mouthfeel is creamy and rich, extremely pleasing on the palette.

Taste is...... a holy spice overload. It's like biting into a ginger root and then shoving a spoonful of nutmeg in your mouth. It's absolutely palette wrecking to this drinker. The molasses and pumpkin are lost under the intensity of spice in the first sip.

As labeled, this beer is big and intense in flavor. Personally, I found it too strongly spiced, but for those of you who like spiced beers, this beer will be a real gem. Definitely a sipper due to the ABV and intense flavors, I can imagine it being great on a cold night by the fire.