As 2013 comes to a close, I want to once again say "Thank You" to everyone who has taken the time to read this humble beer blog.

The past year saw this humble blog break the 1,000 unique visitor barrier, which is pretty cool, and I think speaks to the continued rabid growth of craft beer culture. Reading wonderful compliments from people who have stumbled upon Man Drinks Beer when searing for local Massachusetts beer info online is extremely rewarding, and I thank everyone who took the time to comment and give feedback.

The year was, for me, personally, a year of change and challenges. Laid off from a job of 15 years in February, I embarked on a new job search, and landed a new job- in a new and very different industry- in April. I can't lie, it cut into the blogging- and related activities- big time. This was supposed to be the year I started publishing on a regular schedule. This did not happen. I was supposed to attend the beer blogger conference, which was in Boston this year. This also did not happen. I was suppose to expand content beyond reviews. We all know how that turned out.

Hey, life happens. We deal with it. And- sometimes- beer helps. And running. But that's a blog for another time...

And now for a look back at my favorite local beers from 2013. There were a lot of good ones, but here are the ones that really stuck out. 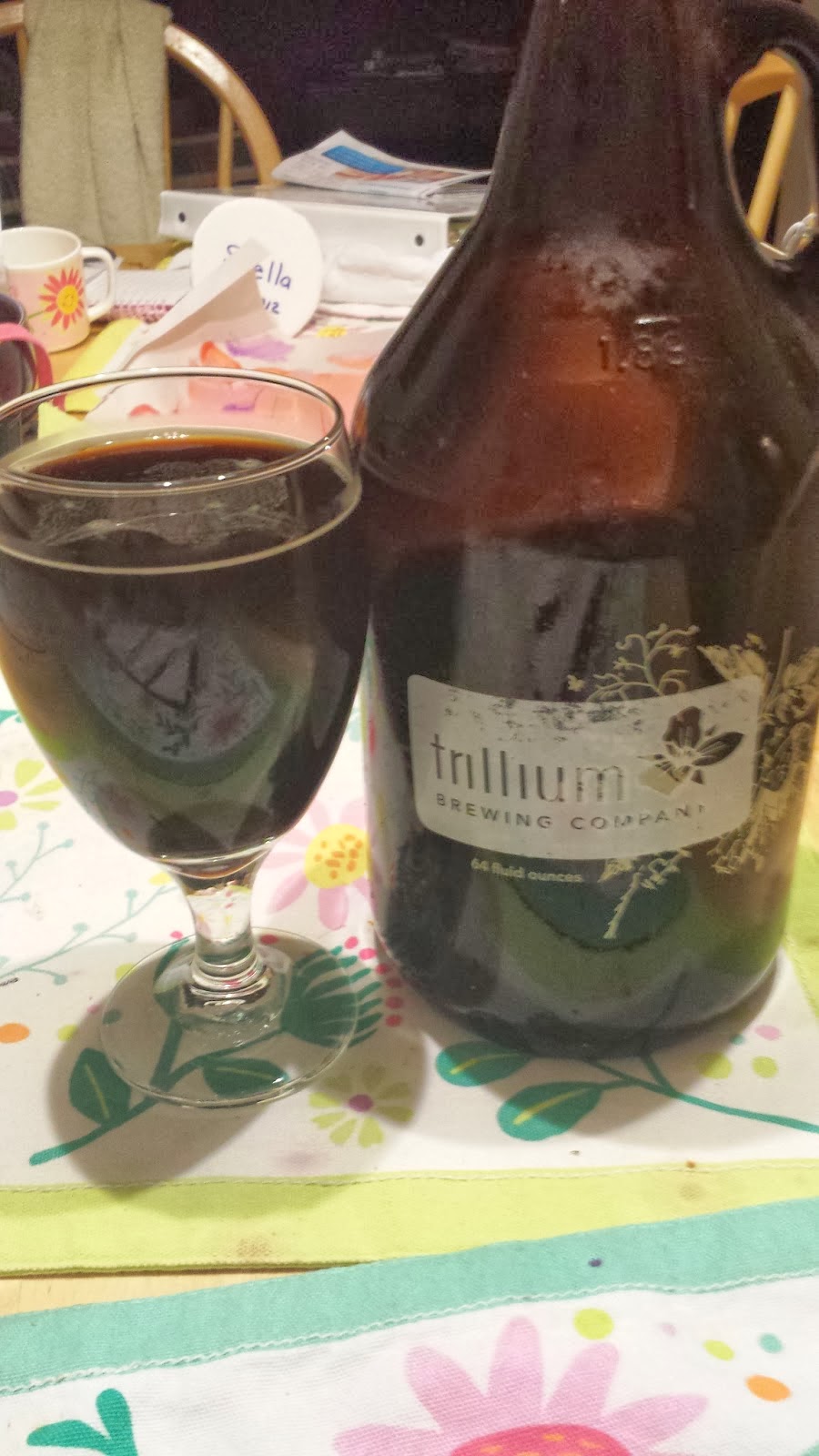 1. Trillium Brewing- "Pot and Kettle Porter"- I finally made it into Trillium-located in Boston, in Fort Point- in July, and damn was it worth the drive in (and terrible parking). Since opening in early 2013, Trillium has become the darling of the Boston beer scene, and it's earned the reputation in a massive way.This porter is fantastic, made with more malts than I can count (or feel like typing) and Columbus hops, it's a dark, robust, malty, flavorful and luscious porter. They now offer this in a whiskey barrel aged version. Sadly, I have not yet procured a bottle.

2. Wormtown Brewery- "Sweet Tats"- Wormtown is one hell of a brewery, and this is one tremendous stout. Incorporating locally roasted coffee, its got an amazing coffee nose- with hints of vanilla- and tons of flavor. Fresh roasted coffee notes up front, super smooth, malty, with a nice subtle alcohol burn finish, one of the best stouts I've ever had, bar none.

3. Jacks Abby- "Second Anniversary Lager"- It's a double India Pale Lager from Jack's Abby. Need I say more? I hear they tweaked this recipe and renamed it "Mass Rising", so if you find a bottle, grab it and enjoy the rarity and deliciousness. (and I am sure "Mass Rising" is awesome as well. It did win a gold medal at the GABF this year. I just haven't had it yet :( )

4. Foolproof Brewing Company- "Backyahd IPA"- I debated putting a Rhode Island Brewery on this list, but frankly this beer was just far too good not to include. An excellent IPA, loaded with tropical fruit notes and hoppy brightness, this is the best kept secret in local beer. Foolproof also offers an Imperial version of this, called "King of the Yahd". I haven't had it, but it's on my "to drink" list for 2014.

5. Blue Hills Brewery- "King's Kolsch"- Nobody brews a kolsch these days, and it's a shame. I love Blue Hills take on the style, which works beautifully with their distinctive house yeast. A crisp, lighter style with lots of flavor, I want to see more kolsch's on the craft beer store shelves in 2014.

There were some other local notables as well, like Mayflower Brewing's one time "5th Anniversary Double India Pale Ale", as well as out of state "WOW" beer's like Anderson Valley's "Bourbon Barrel Stout", which I highly recommend to all.

What does 2014 bring for the craft beer world and this blog? I don't know. But I'm thinking more change is probably in the air, so I'm not making predictions today.

Happy New years all! Have a safe and happy New Years Celebration. 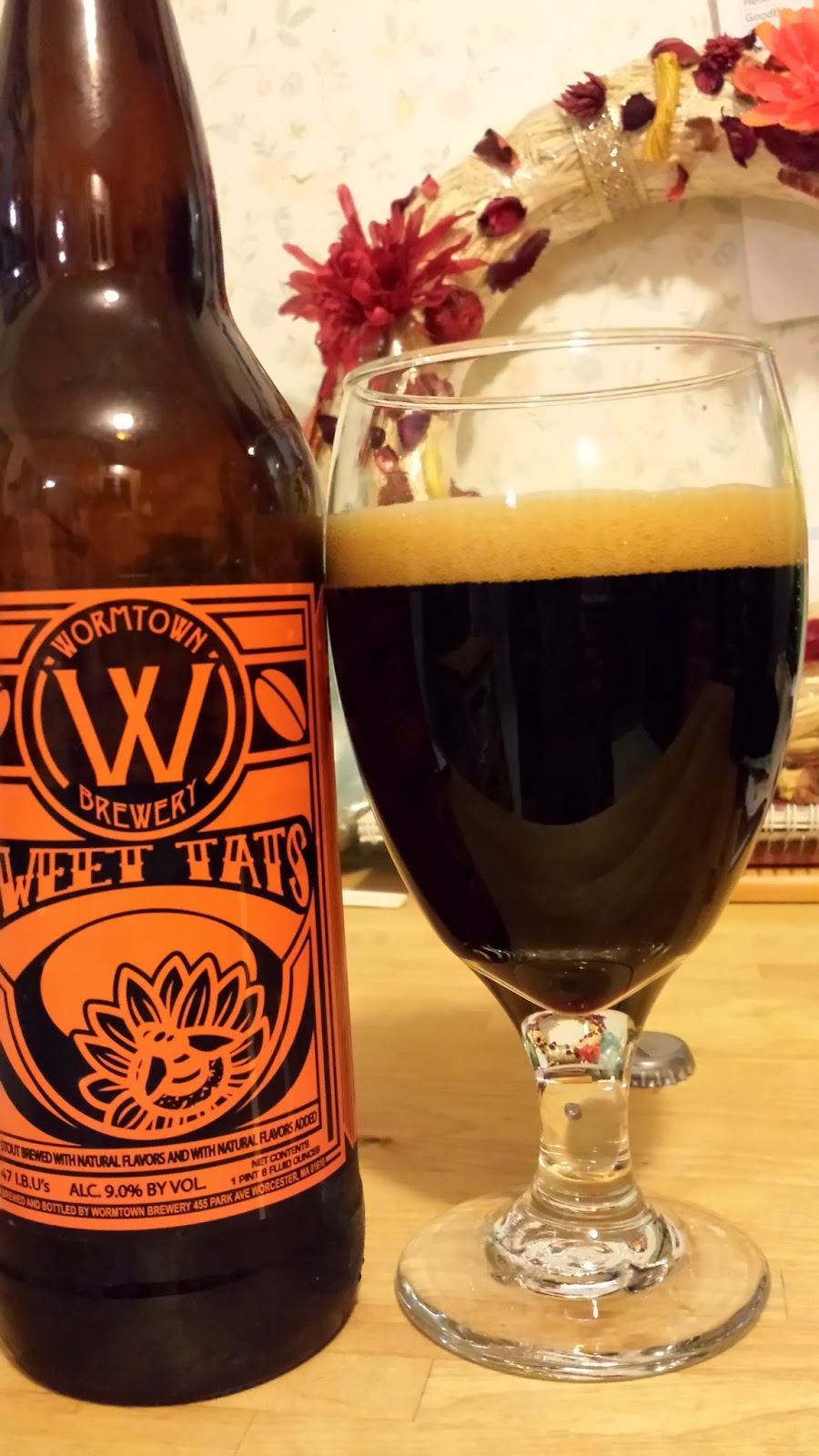 One benefit of the cold weather is that it allows us to break out the thick, dark, hearty beers that pair so well with the blithering, freezing cold. I love curling up in my recliner by the fire, with a good book and a locally brewed stout or porter. Even better if its barrel aged or imperial, to add just a touch of extra warming alcohol burn.

We here in Massachusetts reap the benefits of living in a climate where the brewers know how to blunt the absurdity of our weather with equally absurdly and awesome beers.

Wormtown Brewery's "Sweet Tats" stout is one such absurdly awesome beer. An oatmeal stout brewed with locally roasted coffee, cocoa nibs, and vanilla beans, this beer is an absolute must have in the fridge for the cold winter nights. I was fortunate enough to have my wife bring me home one from the brewery recently. We both agree that we need more of this beer in our fridge.

Fresh roasted coffee beans and vanilla aromas immediately present themselves for your approval, the vanilla very mild, the coffee slightly more pronounced. It is great.

Mouthfeel is soft yet full and creamy and super smooth. Superb body and perfect weight and carbonation. It's positively luscious.

Malty as all get out on first sip, with the malts, coffee and vanilla all playing on the palette. There's a nice balance here, and the 9% alcohol content is hidden well, with only a slight alcohol warmth on the finish betraying it's presence. My impression here? Put it this way, in my notes, I wrote this under taste- "WOW".

Sweet Tats is about as perfectly executed a beer as I've ever had. The coffee and vanilla combo work better  here than I've ever experienced before- both are actually noticeable and contribute in a meaningful way to the flavor profile, something I rarely find when vanilla is involved.

Find this beer, open it, and enjoy it. Cheers!
No comments: