Thanks to the monks at St Josephs Abby in tiny Spencer, MA, the US has the first Trappist Brewery operating outside Europe.

There are only 10 Trappist Breweries in the world. In the simplest terms, a Trappist Brewery is a brewery where the beer is brewed and sold under strict supervision of Trappist Monks. All proceeds from the sale of the beer go to supporting the Abby and their missions work.

Aside from the definition above, there are no actual style guidelines for the actual beer itself. The monks can brew whatever they please. However, given their vows and circumstances, the ingredients are typically local, often sourced from the monastery grounds itself, or not far from. Some of the worlds most celebrated beers are Trappist, although acquiring some of them require a trip to a Belgium and an appointment with the monastery to acquire. The beers from the 10 Trappist Breweries themselves vary greatly, ranging from golden and crisp, to strong and dark, to almost funky/sour in style.

The monk at St Josephs released their Spencer Ale this past week, and by lucky coincidence I happened to be at Julio's Liquors when they rolled out the first 4 packs for sale and offered a tasting. I tasted, I liked, I purchased a 4 pack... 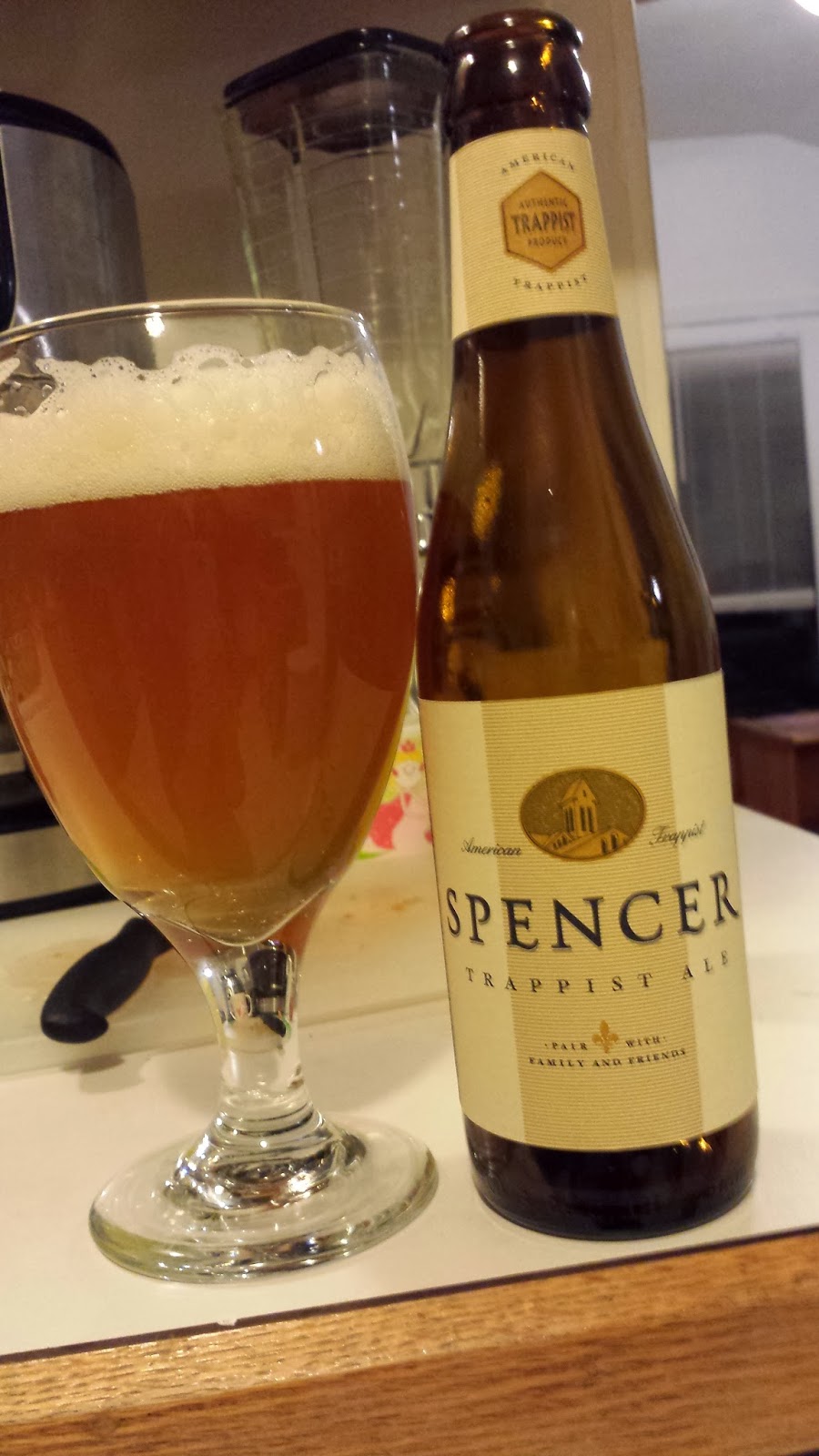 Spencer Ale pours a hazy golden amber, with a big, loose and wispy white head. Head retention was fairly brief, but a nice lacing remains on the surface once it collapses.

The smell is noticeable right away- strong, spicy and fruity. I get strong banana and cloves, very reminiscent of a great hefeweizen, with a bit of peppery spice. It's very aromatic and enticing without being overwhelming.

Mouthfeel is surprisingly light and very active. There's a lot of fizz here. But I'm not complaining, just making note of it 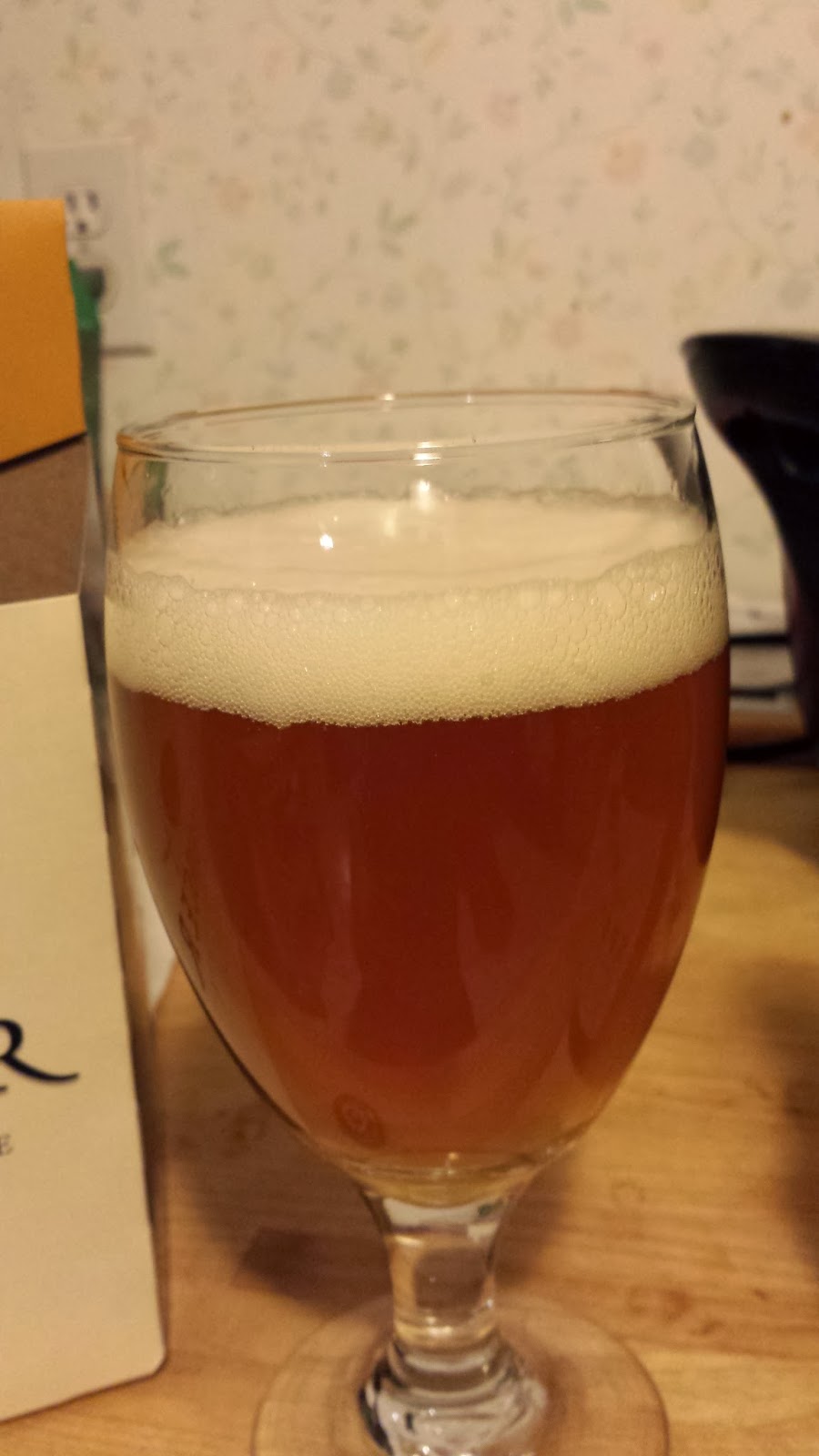 At first sip I get a mild and hot peppery spice, like pink peppercorns. This is followed by notes of fruit and tangy yeasty esters. It's very flavorful yet balanced. Mild banana and cloves notes follow and lead to a somewhat dry, light, crisp finish.

Overall, I thought this was a very, very good beer. It's extremely drinkable, with lots of complex but not overwhelming flavors. It reminded me of a good Belgian Ale. I understand that this was brewed by the monks to enjoy with their lunch, and I would call it great success. This would make a great lunch time brew.

Spencer Ale is brewed with Willamette and Nugget Hops from Washington State, a propriety malt bill consisting of 2 and 6 row malted barely, along with a caramel Munich specialty malt from Wisconsin. The yeast is propagated on the grounds of the monastery. The beer is unfiltered and unpasteurized.

How can this not be awesome? 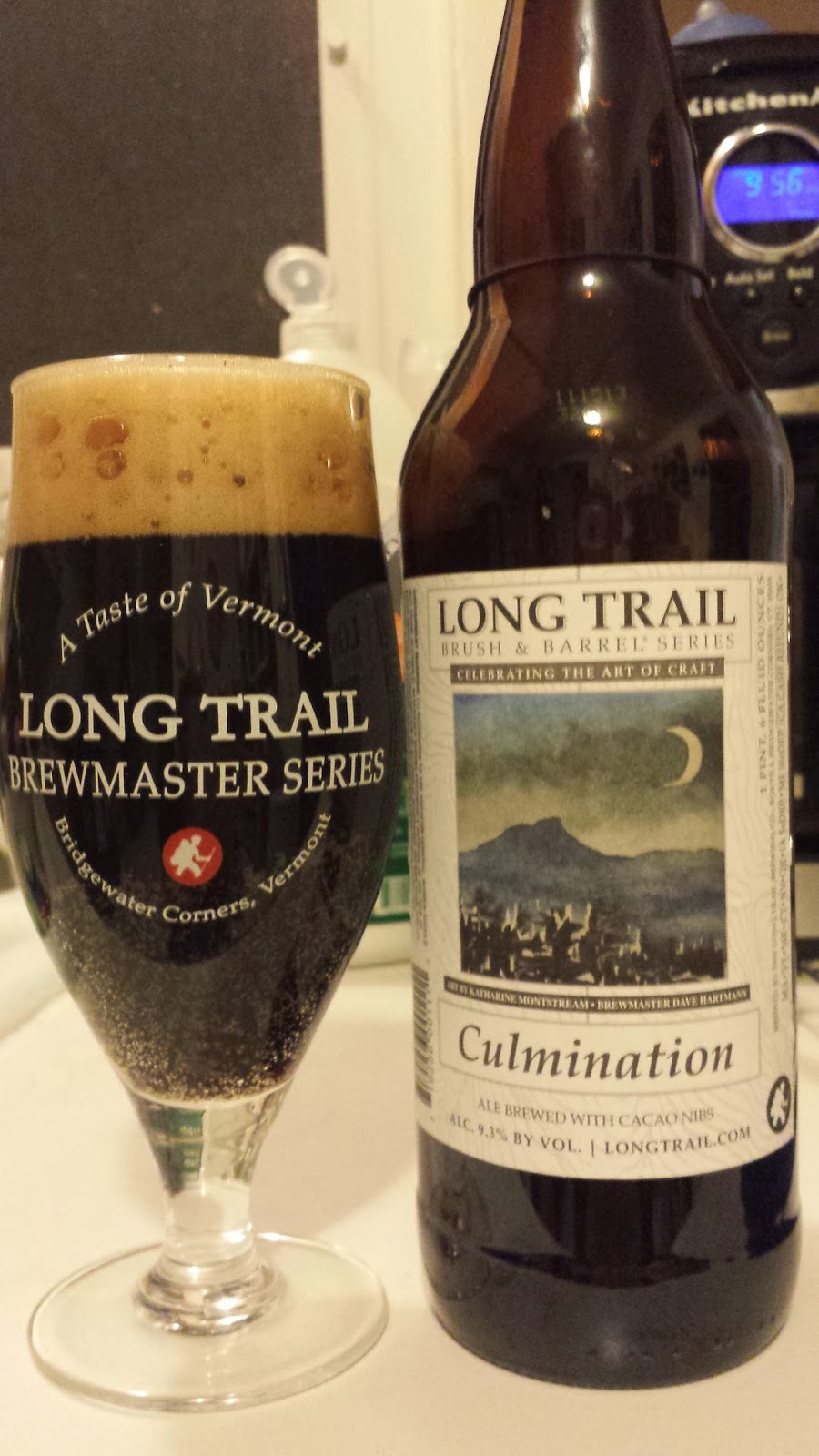 Culmination is a part of Long Trails "Brush and Barrel Series", where the brewery teams with a local artist to brew a beer and the artist creates the art for the packaging. From the bottle tag- "Our hope is that artists and brewers draw creative inspiration from one another and push past the boundaries of their respective art forms".

The art for this bottle was created by Katharine Montstream, a landscape painter from Burlington, VT

The smell is awesome- strong fresh roasted coffee is immediately present. This transitions seamlessly to more of a roasted malt aroma.

Mouthfeel is full bodied, firm, and luscious, with perfect porter carbonation, which is to say moderate. There is very little activity.

This is a great porter. Love everything about it- the body, the strong, distinct aromas and flavors combine to create an amazingly drinkable 9.3% porter, with absolutely no alcohol taste or burn at all.

I highly recommend this beer.

And yes, I know Long Trail isn't really a "local" Massachusetts beer, but Vermont is close enough, right?
No comments:

North Carolina has become quite the brewing hot bed, with more than 70 breweries and brew pubs located in the Tar Heel State. The craft beer industry has noticed- west coast brewing heavy weight Oskar Blues (Colorado) has set up shop in North Carolina in an attempt to facilitate better distribution on the flush with cash (and perpetually thirsty) East Coast, and their Colorado neighbors at New Belgium have begun work on their own North Carolina brewery in Asheville, scheduled to start brewing in 2015.

In short- it's a good time to be a beer lover in North Carolina!

My mother in law was in NC recently visiting family, and as I understand it, my cousin-in-law sent a few local brews back with her for my enjoyment. As I also understand it, her husband may or may not have been aware of these beers being "liberated" from his collection, so Adam- I thank you, and I owe you some beers! 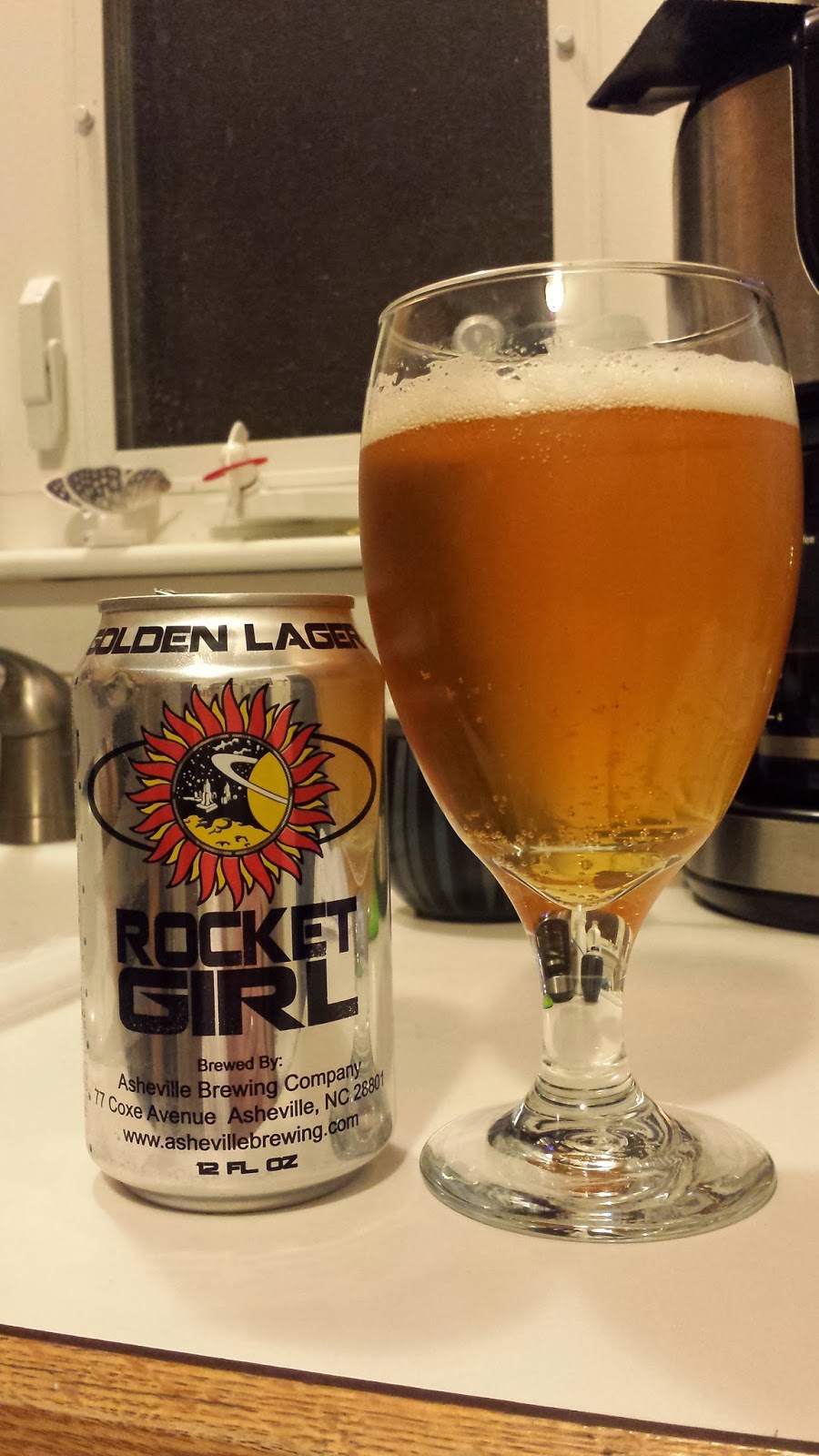 This golden lager- from North Carolina local's Asheville Brewing - pours a deep, clear golden, with a low wispy white head. Smell is of fresh bread, with undertones of lager yeast and malt.

Mouthfeel is light and smooth, with perfect carbonation. Taste follows the smell, mildly yeasty but clean and crisp, with a touch of citrusy to brighten it up. Finish is clean and crisp. 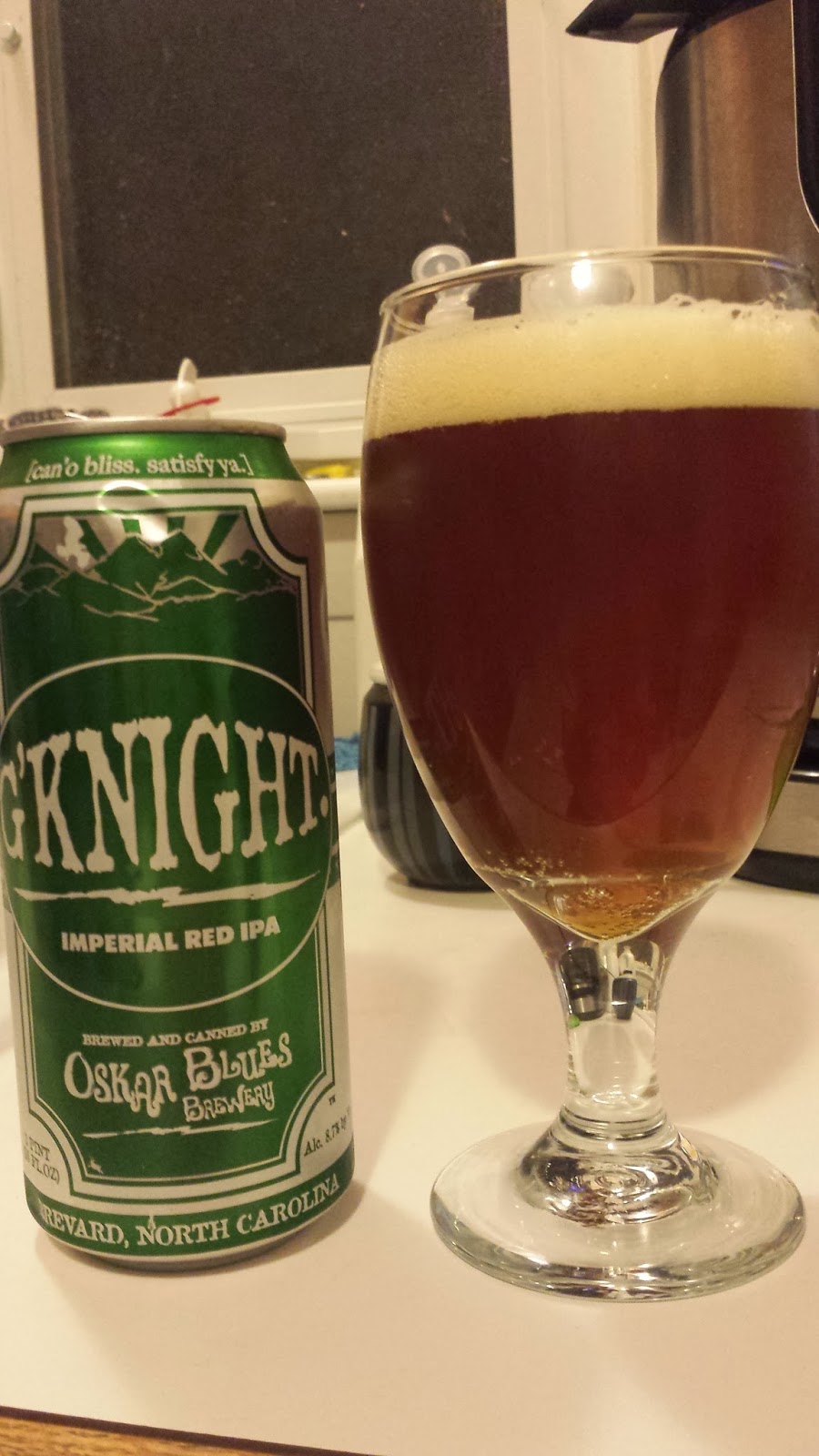 The smell is amazing- G'night is a dry hopped super hop bomb- sweet and hoppy. Lots of pungent tropical fruit sweetness and resinous piney hop aroma waft from the glass.

Mouthfeel is moderate, with surprising carbonation. Its kinda fizzy.

Taste is wicked bitter up front. Lots of sweet piney hops with a noticeable alcohol warmth. Flavors are strong but not distinct, sort of muddled. A robust malt bill tries to balance out the assault of hops... but fails. Less sweetness in the taste compared to the nose, but there is just enough to notice. Finish is very warm and bitter.

Loved this beer- massively aromatic, super sticky hoppy, with a great finish. I highly recommend this beer, but be warned, it's not for the faint of heart.

Bill AKA ManDrinksBeer
No comments: