It all started 5 years ago with this short little post.

I started this blog for two reasons: 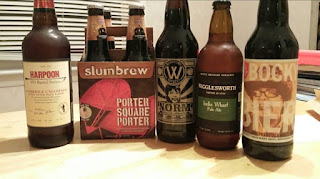 I also thought that maybe I could educate people about craft beer.

Turns out I didn't know nearly as much as I thought I did.

In these past 5 years I have learned far, far more than I've "taught". For this I am grateful.

And I've met some truly wonderful people in the craft beer world- brewers, bloggers, bottle shop owners, other craft beer fans. "Craft beer people" are some on the nicest, kindest, friendliest people I've ever meet. For this I am also grateful.

I remember walking into the brand new Jack's Abby brewery on Morton Street in Framingham on the day it opened in 2011.  There were two beers on tap, and Hoponius Union was NOT one of them. You could only get a sample. I recall it was Red Tape Lager and Saxony Pilsner.  I liked them both. I bought a pint glass, which I still have.

Today, a mere 5 years later, Jack's Abby has a huge, beautiful new space on Clinton Street, with 24 beautiful, full size beers on tap. And a restaurant. I go there often, and I love it.

Recently we've made some long overdue changes here at ManDrinksBeer, finally trying to spruce up the site a bit. I hope you like it. Let me know what you think.

Thank you for reading. Here's to the next 5 years!