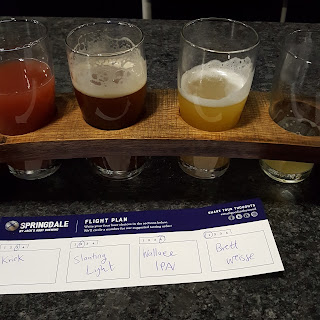 The newest adventure in beer by the team at Jack's Abby opened on December 15th, right next door to Jack's Abby's Beer Hall- welcome the Springdale Barrel Room to the Massachusetts craft beer scene!

What is the Springdale Barrel Room? It's the largest barrel room in New England, where the skilled brewers from Jack's Abby work with their collection of over 1,000 barrels to create barrel aged ales, sours, and everything in between for your beer drinking pleasure.

Jack's Abby built its reputation on brewing the very best lagers anywhere. With the creation of Springdale, the team is now free to expand into ales and all other variants of barrel aged beers not currently available in the Beer Hall. Ever wonder how Jack's Abby would brew a cloudy, east coast IPA? Well, wonder no more, because they have one at Springdale!

Are sour beers your thing? Then come on down, because they have a half dozen, and more on the way.

I made sure to visit Springdale on opening night, despite not being a sour fan at all, I had to see what they were doing. I did something I rarely do, I order flights and sampled basically the entire menu. Here are my 4 favorites, in no particular order:

In summary, the Springdale Barrel room is awesome, and you and all of your friends should go. It's a huge open space, with old school pinball, video games, and corn hole.

Due to paperwork issues with some permits, Springdale is temporarily closed and will reopen on 1/14/17.

I have the distinct pleasure of living right in between Boston and Worcester. So when a great new brewery opens in either one of these great cities, I can get there relatively easily. But these days, the breweries just keep getting closer and closer.

And now the breweries are getting even closer! Welcome Start Line Brewing, now open in Hopkinton! (and frighteningly close to my house...great for beer, bad for my wallet!)

I wandered in one Friday after work and sampled a few brews. They were all good, some VERY good. So, of course I took  home a few crowlers. Here are my thoughts on several of the beers being served up by Start Line.

This was my absolute favorite, although all of the beers are rock solid. Big roasty aroma, nice tan head, and a super velvety body from this Nitro infused (Nitro is tap room only, for now) stout. I got bitter chocolate and coffee notes, big and tasty but not overpowering. Ty, who was working the bar when I was there, told me they were still playing around with the gas mixture, but that they had introduced nitro to this brew and were still refining it a bit. I thought this was a top notch stout. The crowler did have some issues with pressure loss (remember, new brewery, still learning), but it was still very good.  I'll absolutely be back for more of this bad boy.
Hop Load IPA
6.2% ABV

IPA's pay the bills, I've had more than one brewer tell me this. This one will be paying them for Start Line. A clear, honey colored ale with a sweet, hoppy aroma that elicits tropical fruit, this IPA brings the hops but with a reasonable abv. I found this beer to have a light to moderate feel on the palette, and a resiny hoppy flavor that was nicely balanced with a malty sweetness. A strong debut IPA. 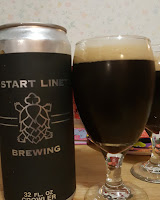 I wrote a piece several years ago praying for the death of the Black IPA fad.

And for once, I'm glad. This is a damn good beer. And I don't like black IPAs. At all.

Pouring dark black with an aroma that is as equally malty as it is hoppy, I found this beer soft in mouthfeel, with an earthy malty taste up front followed by a bitter, hoppy finish.

There are more beers to sample at Start Line, but I'm not going to spoil it for you. Go check them out and tell me what you think.