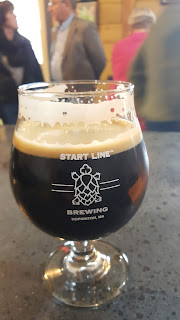 I am less happy to report that I am also suddenly, unexpectedly unemployed. Yup, I got laid off a little over a week ago, along with several of my co-workers. It was not expected, I was a bit surprised, but I'm moving on!

Jack's Abby's House Lager has made a triumphant return to the rotation, and we are very happy about that. The day I got laid off, I was given the ax just before lunch, so I headed straight to Jack's Abby for lunch and a Framinghammer Baltic Porter (OK, so it was two, c'mon, I just lost my job!)

Nightshift Brewings great coffee porter, Awake, has made several appearance's in my fridge. 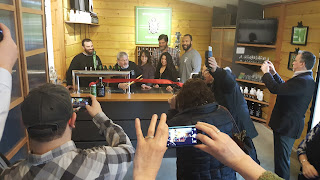 And to the joy of craft beer lovers in Metrowest, another brewery received their full pour permit and began serving full pours last week, so of course I had to be at Start Line Brewing's ribbon cutting ceremony last Thursday! In my glass is their excellent hazelnut coffee stout, which was of course followed by the great Homestretch Chocolate Stout.

So to sum up, 2017 sucks so far, but I am still IPA free. I am enjoying the heavier, darker beers, which of course are perfect for the season and weather. 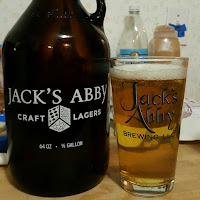 
It wasn't easy. I honestly nearly caved on January 1st. We ordered pizza for dinner, and we wanted beer to go with it (of course!) and my normal beer shop was closed. So I ventured into a new shop, and the craft beer selection was...well, lets just say slim pickin's. But I found something good....(read on! )

For those who may be new here, some background-  in hopes of expanding my beer experience, I am going "IPA Free" for 2017. (not a typo)

I love IPA's, I really do. But I do also think that we as craft beer fans drink them too often, and often at the expense and detriment of ourselves, as well as the many other excellent styles being brewed right now. This is the golden age of brewing, why let your experience be dominated by one style?

Anyhow, here's the run down of excellent, local, non IPA's I enjoyed this past week: 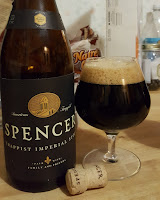 This first week was a big challenge. Looking in the cooler and seeing all these great IPAs just staring back at me, it was second nature to want to grab one. I had to be very, very deliberate when shopping for my beer. I checked shelves I don't usually look at, which was fun. It was also the point of this experience. Normally there would be 2 or 3 IPA's on this list. Removing that as an option forced me to think more about what I was buying and forced me to look at brands and styles that I might not normally consider. It made me uncomfortable, to be honest. Who wants to buy a beer and not love it? Heck, that's why we have "go to" beers. But for me the "go to's" always seemed to be IPA's. Maybe I'm an abnormality, or just a bad, undisciplined beer geek. I guess we shall find out...

In pondering the year in beer for 2016, I was scrolling through my twitter feed when I found Norman Miller's "THE BEER NUT: Three Wishes for 2017" column from the Metrowest Daily News.

Now if you are a craft beer fan, you are probably familiar with The Real Beer Nut. I typically agree with most of his beer thoughts, but one of his wishes for 2017 really hit home, and it was this: "Appreciation for other styles" the third wish in his column.

IPA is the undisputed king of the beer world in New England, and as far as I can tell, everywhere else in the USA. And for good reason, its a great style with many wonderful brewers putting their own spin on it.  India Pale Ales (and Lagers, looking at you Jack's Abby..) are widely available, and more than one brewer and bottle shop owner has told me that "IPA's pay the bills".  Heck, I love IPA's.

Because it is my opinion that we as craft beer drinkers drink far too much of this one style. Check the cooler at your local craft beer shop and calculate the ratio of IPAs to all other style combined. It may shock you.

We are literally living in the golden age of beer in the USA, we have more brewers making more great beer than ever before. States are updating old laws to allow brewers to sell beers for consumption on site! Do you know how crazy this thought was just 15 years ago, when I could count on one hand the number of places where this was possible? Why deprive ourselves of the joy of discovering these other great styles! More porters, pilsners, bocks and saisons for all! More Hefeweizens! More Stout!

I had a major beer revelation recently at the Springdale Barrel room, the great new spot operated by Jack's Abby in Framingham. Springdale was opened to allow the talented staff at Jack's  Abby to move beyond lagers and into the world of sours and ales and age them all in a massive collection of wine, bourbon, sherry, and god only knows what other kind of barrels.

Now, I am not a fan of sour beers. In fact, I hate them. I'd never had a single one I even remotely liked. But, being the huge fan of Jacks Abby that I am, I had to try out Springdale on opening night. I did two flight that were masterfully prepared and guided by the woman running the bar ( I am really sorry I cannot remember her name, she was just awesome.) I made my choices, including sours, and she arranged them in a specific order, based on the characteristics of each beer. Slanting Light was first. Wallace IPA was last. In between I had Kreik Mythology, and something else I can't recall.

Let me just tell you, it was eye opening. Not only did I find a sour or two that I really, really liked, but having the IPA as the last beer in that flight really made it stand out for its heaviness and uber strong flavor. It was great, but compared to the relatively delicate and light flavors of the sours, the IPA came down like a hammer on my palate. I immediately began to wonder what I was missing by not trying beers outside my normal comfort zone. I loved the Kreik Mythology, and Single Shot Sherry on my second flight was equally amazing. Had I not ventured outside my comfort zone, I never would have discovered these great beers.

And that's a really long winded way of saying that I am going to give up IPA's in 2017 and explore all other styles of beer. Bring me your bocks, porters, stouts, pilsners and saisons! Dubbles, Tripples, and Quads, come forth!

And should I fail, well, the penalty is likely a very public mocking while I drink an IPA, so really, there is nothing to lose and everything to gain!

I will try to post weekly updates on this experiment.