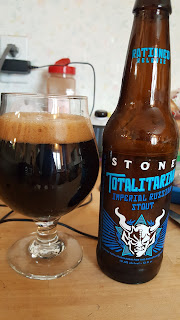 Stone has brought back a fan favorite for 2018- their typically outstanding Russian Imperial Stout, this time available in handy 6 packs!

I've long been a big big fan of this beer. Stone may be more well known for their IPA's, but they really do an outstanding job with stouts as well.

As Stone RIS always does, it pours a thick, semi-viscous black, with a tight caramel colored head.

Aroma is nice.....modest....roasty goodness....peat moss and notes of burnt chocolate.

Mouthfeel is thinner than I recall, full bodied, soft, but not heavy or as thick as it looks.

And the taste....oh the taste in marvelous....all that malty goodness, with  notes of coffee and chocolate bitter. I found a surprising bitterness at the end for a brief moment, coffee and/or hop bitter, and that threw me for a moment. But I either got used to it, or it mellowed, because it was far less noticeable as I worked through the glass.

All in all, this is a truly excellent Russian Imperial Stout. I always love Stones take on the style, and their always unique twists that they incorporate (please bring back the Anise version....please?), like the subtle but wonderful chocolate and coffee I found in this one. At 10% ABV, it's not to be taken lightly. But if you like Russian Imperial Stouts, this one come highly recommended! 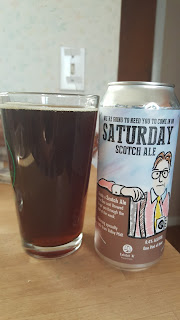